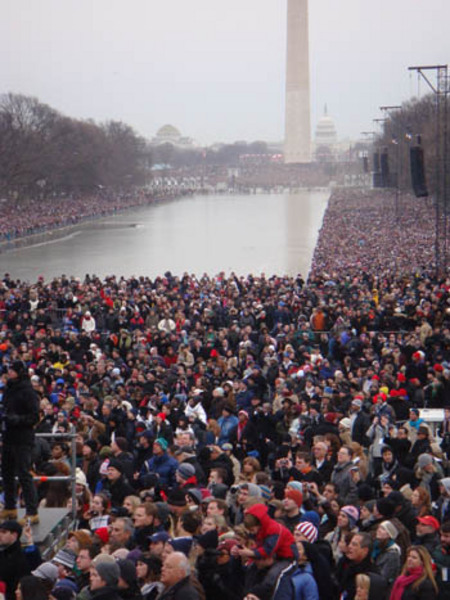 share
'On this spot where we're standing, 46 years ago, Dr King had a dream. On Tuesday that dream comes to pass.' U2 performed Pride and City of Blinding Lights to an audience of 400,000 in front of the Lincoln Memorial in Washington tonight.


Bruce Springsteen, Beyonce, John Legend and James Taylor were among a catalogue of household names performing at the 'We Are One' inaugural concert for President-elect Obama. Towards the end, Samuel L Jackson took the stage in the shadow of the giant statue of Abraham Lincoln and recalled Rosa Parks, the civil rights movement, Martin Luther King and how 'a band from Ireland was moved by Dr King's message and his sacrifice and wrote a song to remember and honour him...'

'Let freedom ring,' announced Bono as U2 arrived on stage and struck up the opening bars of Pride (In The Name of Love). 'This is not just an American dream,' he said. 'Also an Irish dream, a European dream, an African dream ... an Israeli dream ... and also a Palestinian dream.'

'Let freedom ring, let freedom ring....' he continued, as Edge played the opening chords to City of Blinding Lights. 'What a thrill for four Irish boys from the north side of Dublin to honour you sir, the next president of the United States, Barack Obama...'

And it looked beautiful again tonight, in this city of blinding lights where as the song captured it. 'America is getting ready to leave the ground...'

Catch the video highlights and photo's on HBO

Hearts + Minds, Highlights, Live Performances, No Line On The Horizon, TV
U2
©2020 U2.  Powered by Live Nation Entertainment.