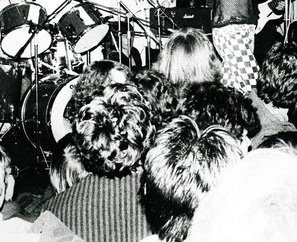 North Side Story brought our subscribers the inside track on U2's formative years. Now this classic 1980 live set captures the sound of that young band as they head out on tour.

Recorded in a small club, with just a few hundred passionate fans, this vintage live set captures a time when the band were taking songs like The Electric Co, I Will Follow and Out of Control on the road across Ireland and the UK .

There was no internet or digital downloading in 1980 - even the CD was still to arrive - the band's debut LP Boy was released on vinyl. In keeping with that history, and in tribute to the return of vinyl, as a U2.com subscriber you'll receive this limited edition live set on two 10" vinyl albums in a bespoke gatefold sleeve.

Like it's companion piece North Side Story, this limited edition release will not be on sale online or in store.

New subscribers have the option of choosing the double vinyl OR North Side Stories, which also comes with the poster, 'Wandering In U2's Dublin', charting the band's connection to their home city over 35 years.

As well as this limited edition gift, subscribers to U2.com gain access to distinct content on the site and are first in line for ticket presales when the band head out on tour.

The cover, title and tracklisting of this special release will be announced in the next few weeks. Delivery of the physical product is expected in Spring 2015.

Early Albums
U2
©2020 U2.  Powered by Live Nation Entertainment.