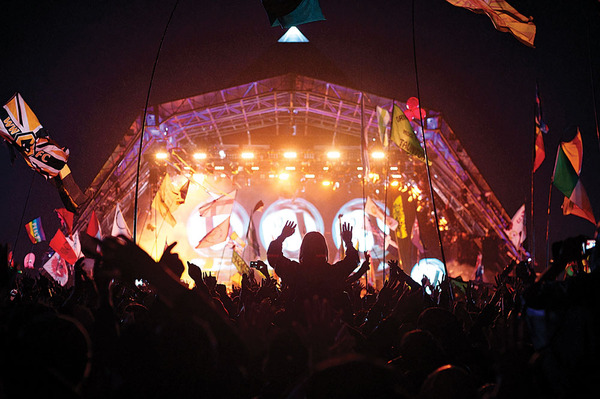 share
'From the Ground Up' is the story of U2360°, the inside track of what became the biggest rock'n'roll tour in history. The recently announced 'U2.com Music Edition' of this essential book, adds the soundtrack - Edge's Picks, a 15 track live CD curated by The Edge.

In our second edited extract, writer Dylan Jones travels with the band to the Glastonbury Festival, describes how Damien Hearst got involved, how the set list came together and why 'it's all about the connection.'

'It's not often you hear an Irishman singing 'Jerusalem',' explains Bono. 'Could be the ley lines...'

Eighteen months ahead of Glastonbury a set list was devised which was basically a three act play: Act I would feature a series of the band's biggest early hits from New Year's Day to 'Streets'. Act II would be a half hour of ZOO TV while Act III would go 360, from Beautiful Day to Elevation. But as time went by, explains Dylan Jones, the band began to question the format.

'Uncertainty reigned for about six months, largely because they were on tour and Glastonbury was very much in the background. And then during the course of the 360 tour various things happened. Not least the reworking of 'Real Thing', which was so strong that it ended up opening the show. Then the question came up, 'Well, if it's good enough to open this show, maybe we should open Glastonbury with it?' But they also realised that if they were going to open with 'Real Thing' they needed a very strong visual for it. And so Bono said, 'I'll text Damien.'

The phrase 'Even Better Than The Real Thing' could be Damien Hirst's motto and he was up for making a video piece for them. The process was a bit of a roller coaster ride but in the end he delivered in spectacular fashion. They work with a lot of artists and designers in making video content but working with an established fine artist is a very different dynamic. They present their vision as a self-contained idea so altering it to work within the parameters of a live show can be very difficult. Eventually Hirst delivered an extraordinary piece of video. What was wonderful about the piece was that he clearly understood the structure and narrative of the song and the edit is fantastic.

In the end one of the power cables blew on the night, meaning that the live feed from the camera shooting the band wasn¹t working, which meant that the Glastonbury audience could only see Hirst's work and no IMAG, which, ironically, probably made the whole thing more powerful. The set turned out to include everything from the irony-free rock of the eighties, and the 'French-disco-variety U2' of the nineties. All of it.

This was Glasto Baby, Achtungberry. At 9.30 that night, after Morrissey's set, under gun-metal grey clouds, and in front of in excess of 50,000 people, the band took to the Pyramid Stage and bashed through a greatest hits collection almost without blinking, beginning with five songs from Achtung Baby and including their debut single, the post-punk 'Out Of Control'. The lean, combative set was a truncated version of the 360 show; shorter, more aggressive, and more reliant on stagecraft than pyrotechnics or light shows, and was interspersed with snatches of Destiny Child's 'Independent Woman', Primal Scream's 'Movin' On Up', Joy Division's 'Love Will Tear Us Apart', Coldplay's 'Yellow' and an a cappella version of 'Jerusalem', followed by some Grade-A 'Bongolese', the unique form of scat-improvisation spouted by the singer when the band are sketching out songs.

'It's not often you hear an Irishman singing 'Jerusalem',' said Bono. 'Could be the ley lines, could be the jet-lag, but it's a very special feeling being here.'

He introduced the band variously as Sir Galahad, a sorcerer, and Friar Tuck. Behind them the specially commissioned Hirst video added to the surreal nature of the show, although their performance was a black-and-white short compared to the Technicolor epic of their stadium show.
'We had bottle at Glastonbury,' said Bono, when I asked him about it a few weeks later. 'Even though it was really tense, we had bottle and we threw ourselves into it. It was slippery and raining but we went for it. You go to Radiohead for melancholy -­ it's beautiful, with lovely purple passages, blues, violets - and you go to Oasis for something earthier. But we've got as much bottle as anyone, we've got as much intimacy, as much delicacy and it's the dimension that I'm most pleased about concerning Glastonbury. It was a little heavier on the attitude than we're normally used to delivering, but the place required it.'

Watching from the side of the stage, what was most impressive was the way in which the band interacted with each other, spurring each other on, looking not unlike they did thirty years previously, huddled together on small stages, desperately trying to appear bigger than they were. Adam was sanguine about the event.
'We've done a lot of our best work in the rain, so maybe of all the bands that were going to have to deal with those conditions maybe it was the best spot for us. It was nerve wracking; Larry's already gone on record saying that the stage was a long way from the audience, or the other way round. There was a big gap because of all that TV production stuff and that was a bit of a shock to get used to after our own stage where we're really very close to our audience. It was hard to go straight from our own American tour, but you just adjust to it; you do the best that you can.
'You can't really prepare when you're suddenly on a completely new stage - everything's different, it's not even your audience, so it is a little bit gladiatorial. You have to try and find a way to connect, keep the energy level at maximum ­ in doing that you break through some of the barriers. You never know in a situation like that whether the sound is going to be optimal - certainly the lighting and the video reinforcements can't possibly be as good as they'd normally be because everyone is flying by the seat of their pants. So you have to assume the worst and go in there to try and blast it out with the energy of the performance. I think that Bono was a little uneasy. Normally at the end of songs, he'd vamp for a while. There'd be longer gaps. There'd be a slightly cooler tempo to the show. But at Glastonbury it was 'Bam! Bam! Bam!' He just didn't want to take a second to allow the energy to drop, and I think it was great.'

For the band, Glastonbury was one big connection. The reason they were here in the first place. 'Ever since the eighties we've been trying to change the live experience,' Bono told me. 'All of that climbing on the speakers, that's all about me. About smashing the barrier between the audience and us. It's about a definition of performing, but what is a performer? When I go to see a play, or a gig, the great performances for me are the ones that involve getting down in the aisles, walking among the crowd, who get in your face, make love to me, you know getting involved. They're not content with this space on stage. They try and get rid of the distance between the audience and the stage. You want people to walk off stage straight into your head. And it's about emotional proximity as much as physical proximity. It's about the emotional connection.'