Every Breaking Wave in Vienna 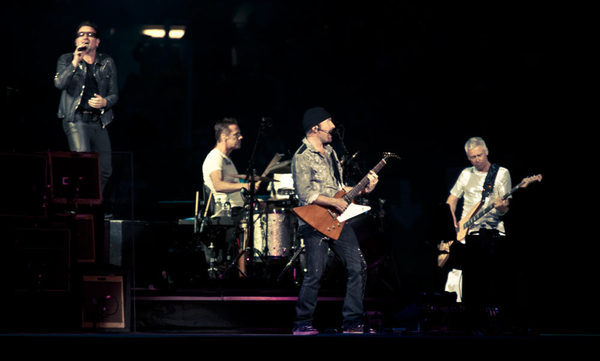 share
After the briefest of five day breaks and the journey from Russia, the 360 Tour is underway again tonight in Vienna, Austria and the ninth show of the  2010 summer leg. Attendance records are broken at the Ernst Happel Stadium: 'On a Monday night - that's very rock and roll of you.'

Every Breaking Wave makes another appearance in the set tonight, after Still Haven't Found and there was a sweet lyrical twist in 'In A Little While' - 'when you've known her 28 years' - as Bono references his anniversary with Ali. And a tantalising burst of Discotheque at the end of 'Crazy' before  the politically potent passage  that features  Sunday Bloody Sunday, MLK and Walk  On  features spoken or visual  references to the people of Israel/Palestine, the Irish flag and Aung San Suu Kyi:'The Nelson Mandela of this time, she is in danger this night.'

That's a pretty broad-brush sketch of the set from us but if you were there tonight you'll have you own highlights and memorable moments.

As one of you has already put it in a great review on our Tours Page: 'The atmosphere was very joyous from the beginning and Bono thanked the crowd by saying: "Wien ist anders (Vienna is different)"'.

Add your reviews and upload your photos to our Tour Page. Check out the full set list - and read what everyone else is saying about the show in Vienna tonight.