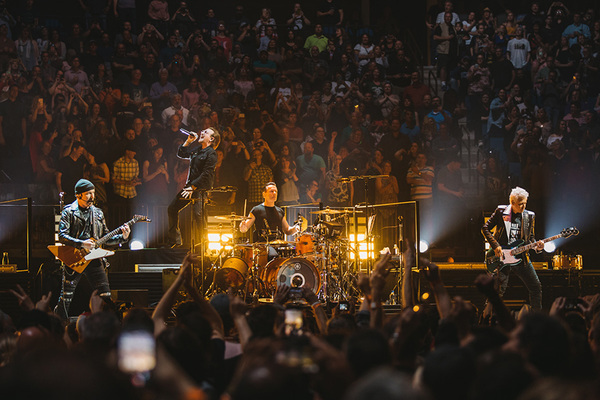 Not quite eight months after having to cancel the St. Louis stop on their Joshua Tree 2017 tour, on Friday U2 returned to America’s Gateway to the West for the rollicking second show of the eXPERIENCE + iNNOCENCE tour. Cathleen Falsani was at the show for U2.com.

“So glad that we’re all still here,” Bono told the boisterous crowd inside the Scottrade Center. “Sorry about last year…We came a year late. Apologies.”

Last autumn, the band regrettably had to cancel their September 16 show in St. Louis when protests broke out across the city after a judge acquitted a former white St. Louis police officer in the 2011 death of a black suspect. When protests turned violent the day before the scheduled show, the St. Louis Police Department said it would not be able to provide standard protection for the concert - U2 and Live Nation made the difficult decision to cancel the show and issue refunds. None of that cast a pall over last night’s concertgoers who filled the arena with a crackling positive energy that was both palpable and contagious. Ashley Judd, who was in the audience, described the show on Twitter as ‘remarkable...fiery and touching.’

‘It was a healing experience,’ said Kelley Weber, a St. Louis high school teacher who’s been a U2 fan since she was in high school herself. ‘Throughout Friday’s show, the band reminded us about what unites us as a community, that, even in the midst of darkness, there can be joy, and that love really is bigger than anything in its way.’

The second stop on the eXPERIENCE + iNNOCENCE Tour, which heads next to California and Nevada, brought a few tweaks to the setlist from opening night in Tulsa. ‘New Year’s Day’ made its tour debut during the first act between a barn-burning rendition of ‘I Will Follow’ that had the arena jumping, and ‘All Because of You.’ ‘Song For Someone’, ‘Raised By Wolves’, and ‘Who’s Gonna Ride Your Wild Horses’ rotated out of the lineup. (See the complete setlist here.)

The audience clearly delighted in the resurrection of Bono’s macabre, top-hatted Mr. MacPhisto and the band’s performance of ‘Acrobat’ (a first for many in the room as it had made its live world debut in Tulsa, 27 years after it was released on the Achtung Baby album.)

In St. Louis, the band’s performance of ‘Pride (In The Name Of Love)’ — where Bono shouted ‘this is not America!’ through a red-white-and-blue loudhailer while images of neo-Nazis and white supremacists marching in Charlottesville, North Carolina and elsewhere played on the immense high-definition screens of the ‘barricage’ in the center of the arena — and ‘One’ felt even more poignant than usual.

‘You can only solve these problems if you reach out to the people who you don’t normally want to sit across from,’ Bono said, introducing ‘One’ during the encore. ‘So, forget the White House, left and right. Working together: that’s what we learned in the One Campaign. We can work together, whatever it is: budgets, gun violence, health care - it won’t be solved by half the country, that’s for sure. And you can disagree on almost everything if the one thing you agree on is important enough. Choose what that is.’

The emotional show drew to a close with two songs from Songs of Experience: the anthem ‘Love Is Bigger Than Anything In Its Way’ and '13 (There Is A Light)', which ended with Bono making his exit through the crowd at the back of the arena as he sang the final words, ‘someone like … me.’

Next up: Monday, May 7, the SAP Center San Jose.

Here's the complete set list and the show social stream - and if you were at the show in St Louis, add your own review and upload your photos here.