'Get Out Of Your Own Way' 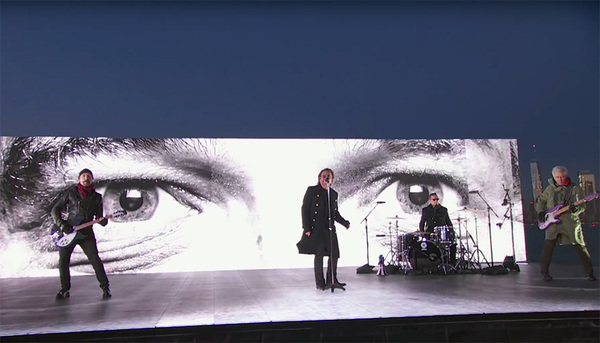 'Blessed are the Shithole Countries, for they gave us the American dream!' Bono shouted through a star-spangled loudhailer from a barge on the Hudson River in the footprint of the Statue of Liberty, where U2 performed 'Get Out Of Your Own Way' during the 60th Grammy Awards in New York City tonight.

'Blessed are the arrogant for theirs is the kingdom of their own company! Blessed are the bullies because one day they will have to stand up to themselves!' Bono shouted into the blustery winter's night at the end of the song, bathed in the torchlight of Lady Liberty.

'Give me your tired, your poor/ Your huddled masses yearning to breathe free…'

It was a powerful, consciousness-raising moment in a Grammy night that shone the spotlight on social issues from racism and gun violence, to immigration and sexual violence against women.

U2 have won 22 Grammy awards since their first two (Album Of The Year and Best Rock Performance By A Duo Or Group With Vocal) in 1987 for 'The Joshua Tree'. The band's first Grammys performance was at the 43rd annual music awards in 2001. They are the only group to have won an Album of the Year Award Grammy twice—for 'The Joshua Tree' and in 2005 'How To Dismantle An Atomic Bomb'.

Awards, Singles, Songs of Experience, TV
U2
©2020 U2.  Powered by Live Nation Entertainment.