'A Sort of Homecoming' 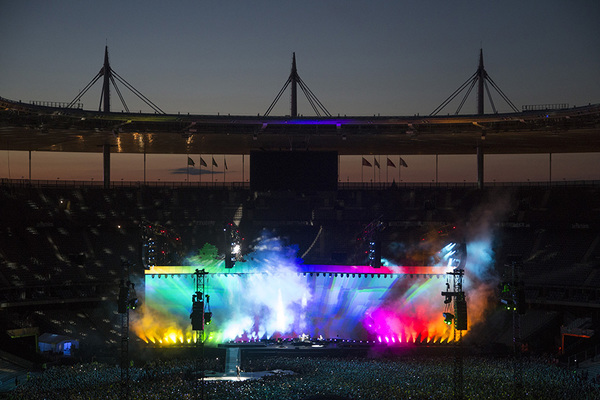 Change-ups from night 1. Slot 3 lit the internet social up as the the arpeggio triplets riff of A Sort of Homecoming echoed things Bono had touched on from the previous night - "Why do we feel so at home… home.. .home.. what is that feeling of ... home"?
A kind of coming home, travelling pilgrims looking for one, making one in a once-strange and foreign land. The dream, the goal of a (safe) European home perhaps? Mysterious Ways was back with a fan dancing on stage, and a real lift to end the rain-touched night with banging version of I Will Follow.

Social Posts
@markwmerriman  aka 'U2Mooner' aka Mark from South OC, has been up front of GA for many shows this tour and tours past. He DM'd us right after the show : 'U2 is on fire for night 2 in Paris, falling into a Paris groove. Bono's vocals, the best so far this tour. Mysterious Ways moves in the set, with a voluptuous beauty gracing the stage, let her spirit move the crowd.
The French accent on 'singalong' portions during songs like "Found", etc. make it know that the U2 spirit beats deeply in the French hearts.The finale with "I Will Follow" ripped through the crowd like a ribbon of light headed for the cosmos. A fitting end to an epic show.'

French voices on social media (via twitter) :
@Totoro_lucile 'C'est pour les soirs comme ça que j'aime U2' ((It's for nights like this one that I love U2…)'

In The Press
'"Exit" is without doubt the highlight of the show: after an anti-Trump speech the band launch into a hypnotic and furious trip with flashing lights and crackling images under the beat of Larry Mullen Jr's drums and Adam Clayton's bass. And the ultimate gift: Patti Smith comes on stage to sing a moving "Mothers Of The Disappeared" duet with Bono – the best song on "The Joshua Tree". Bono fell to his knees to thank her….' (Gala review by Jean-Christian Hay)

If You Had To Pick One Song
A Sort Of Homecoming, another rare appearance especially in Europe, @amubalt listening in via twitter hopes it's not the last.. : 'Only caught last minute of ASOH. Still has me in tears. Please @u2 play ASOH in Brussels. Make my 100th show incredible'
@muziekmenneke agreed : 'So good to see A Sort Of Homecoming back! Please play 2nd night in Amsterdam!'

Review On U2.com
christophecumps728.  Paris July 26. ' Even more a delight than the Barcelona show. The drizzle stopped around 9:00 PM and with a few changes in the setlist (A Sort Of Homecoming, Mysterious Ways, I Will Follow - thank you for those) the show was nothing less than memorable. One love from Belgium. Christophe'

Other Noteworthy Stuff :
snippet of `Stand By Me in 'Found', harks back to original Joshua Tree Tour.
big thanks  to @Judith86 from @U2Achtung_ for assistance with our French translations for this piece

If you were at the second night in Paris, tell us all about it. Add your own review and photos on our tour pages.