Is This You On Stage ?

On any given night you never know who might climb up on stage to dance with the band on Mysterious Ways.
Maybe one night in 2015 it was you.
Or someone you know.
This great clip that will bring it all back.   ‘It’s alright, it’s alright…’

Directed by Hamish Hamilton, the 2.5 hour film features 30 tracks including a guest performance by Eagles of Death Metal. The Deluxe DVD, Blu-ray and Deluxe Digital formats come with bonus material including Patti Smith performing “People Have The Power’, Gavin Friday’s guide to "Cedarwood Road", a behind-the-scenes piece with Hamish Hamilton, on-stage tour videos for "The Wanderer" and "The Troubles" as well as six music videos commissioned for single releases from Songs of Innocence.

BUY IT HERE AND ALSO AT AMAZON, ITUNES + UMG

Comments
22
You must be a logged-in member to add comments.
SIGN IN / SIGN UP
robiter61
10 February, 2017
U2 colonna sonora della mia vita.
Fantastico questo video. U2 la mia vita.
gommers
22 November, 2016
Woman in picture is....
My wife. This was the concert in Amsterdam on the 12th.
EdgeSoundEffects
25 July, 2016
Pure Joy
That is the perfect simple album cover for a future album. Pure Joy of a fan and you can tell Bono loves that moment Next U2 album title: Pure Joy Like a child that has not learned to lie or be deceitful yet. They cry when they want, they laugh when they want, they eat when they want. Pure Joy of a child is beautiful because it is natural and real and that is what they felt at that moment Could be a concept themed album like Innocence--only songs written from the perspective of Parents and all the work and hopes and grief that means
jtkaseman
14 July, 2016
U2 never disappoints
Their latest CD / DVD is a fine addition to the U2 never disappointing string. When the DVD was released I was ready to order concert tickets. GREAT COLLECTION of heart felt songs! Time to return to the USA., I'm ready.
Annartist41
07 July, 2016
Always the same faces
I figured out the secret to get on stage, if Brian Murphy likes you, then you get on stage. He's the portal. Lol.
bartsiebers
28 June, 2016
Dublin after Amsterdam
We enjoyed one night in the Amsterdam Arena and we we so lucky to get tickets for an amazing Friday night in Dublin. What an atmosphere... Hope to see U soon. Bart and Goukje
mooner
27 June, 2016
Many of my new friends made it on stage.
So thrilled for Veronica, Ignacio, and others I call friends to have made it up on stage with my 4 Fav Fab Irish lads. The U2 Facebook & U2 Instagram as "rainbow man" was "as far as I could reach"... luv you guys... Thanks for watching over them Brian and others...
BONOBOMUSIC
15 June, 2016
Blonde girl
@derekreilly Blonde Girl Is that blonde girl the girl from the Saturday 12th September Ziggo Dome show in Amsterdam? Yes, she is! I was there that night. Her name is Laura, she was gorgeous
pedrovilhena
14 June, 2016
I go on stage in Portugal on next tour!
No! However I will be delighted when my 4 friends come to Portugal. I go on stage. Dreamer!
sthall
13 June, 2016
Caitlyn
She is Caitlyn from Mississippi at the Chicago concert on June 2.
sthall
13 June, 2016
Chicago
I think that is a girl named Kaitlyn from Mississippi at the Chicago concert on July 2. We flew from Louisiana with our two teenage girls and had a good time.
sthall
13 June, 2016
1st Pic
I think that first pic is of Katlyn (sp?) from Mississippi at the Chicago concert on July 2. I was there
Curach
13 June, 2016
People are beautiful!
I love it, thanks for compiling the beauty!
Naomi Henderson
12 June, 2016
Not me, but so great!
So proud that I personally know so many of them!
brigitte2018
10 June, 2016
Brigitte from Paris.
Mille fois merci, thank you very much Bono, The Edge, Adam and Larry. I am happy to have danced with you in Paris. My dreams came true. U2 is the best band in the world. The DVD is perfect. Best regards and kisses. Brigitte from Paris.
derekreilly
10 June, 2016
Blonde Girl
Is that blonde girl the girl from the Saturday 12th September Ziggo Dome show in Amsterdam?
Raheny66
10 June, 2016
Innocence & experience
Just nipped out to buy the blueray version, sat through 4 hours of pure excellence. Reminded me of the two gigs I attended, now I have just received an email informing me the deluxe version has been shipped, happy days, thanks U2 for being there
MANGAS
10 June, 2016
amazing
Probably the best moment of the show.
alexct
10 June, 2016
Bono said it!
During the last show in Paris Bono said it: WHAT A COLLECTION YOU ARE!
ju2nior_br
10 June, 2016
Climb up on stage to dance with the band
Congrats for all the fans that could make their dreams come true with the band on stage. That eXPERIENCE was unbelievalble. We're ready for next chapters... 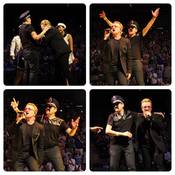 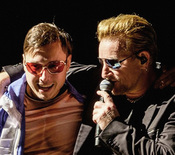