'Love Song To The Universe in Munich' 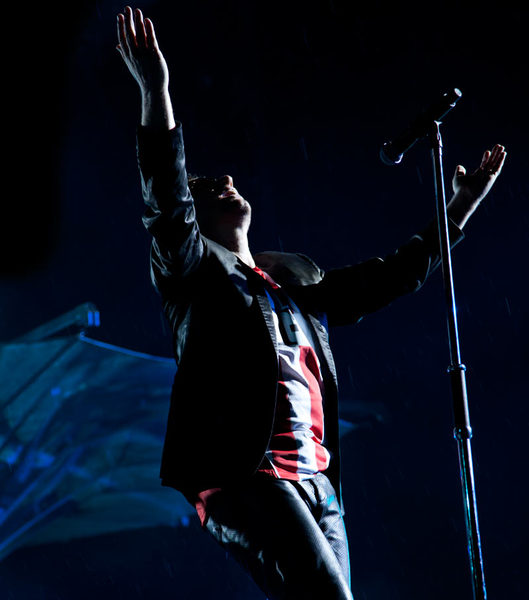 share
'I can't wait any longer for your love/ Praying the night will come quickly...'

They've played it live barely a handful of times and yet tonight the Olympic Stadium in Munich sang the beautiful  ballad North Star back to the band. 'That would be the internet,' surmises a surprised Bono. 'That's an unexpected surprise - Thank you. That's our love song to the universe€¦'

And tonight was a bit of a love song to Germany, to Munich and especially to the gifted health professionals who helped Bono recover from injury earlier in the year. Frankly they're the reason we're all here tonight. 'This is a very special city to this band and to me personally. Without the good doctors and nurses of University Hospital, I would not be standing here, this tour would not be happening€¦'
'It€™s a funny thing but if you€™re a rock star or a film star or a sports star, people think of you as heroic just for doing the thing that you love. But we are not heroic - nurses and doctors are truly heroic.This is the best city in the world for physicians.'
Doesn't take much imagination to sense the ovation that received, after which Bono took a moment to thank Professor Tonn who performed his back surgery - and is in the audience - and Dr Muller Wolfhart  and Klaus and Imke who also worked on his recovery.

The 360 Tour has had a great time in Germany over the last couple of years - ever since the  German Music Awards way back in the Spring of last year. Not only were we in Berlin and Gelsenkirchen for shows last year but we were back to play at the Brandenburg Gate in November to celebrate the anniversary of the fall of the Berlin Wall and this year again with shows in Frankfurt and Hannover.
'So this is Wednesday night in Munich,' reflects Bono, at the end of Until The End of the World. 'This is the right place to be at the right time - good luck with the match!
'This band has been coming to Munich nearly as long as Oktoberfest and we are 200 years old in November,' he digresses, before revealing that he'd been trying to think which band member is which beer: Augustiner (Edge?), Bockbier (Larry?), Radler (Adam?). 'I'll stick with the Guinness if that's okay €¦'

As for the match, this was the opening Champions League fixture between Bayern Munich and  Roma and sensing that more than a few of the crowd tonight are wondering about the score, by the time the band are back on stage for With or Without You, Bono is wearing a Bayern Munich shirt and can announce the result. (Two nil to the home team, as you ask).

Beneath the crazy glass roofed stadium, there was always the threat of another downpour tonight  - Edge has a new cover over his amps for extra protection - but if the rain arrives during 'Mothers of the Disappeared' and continues through 'Walk On', it is soon gone and we're not to be drenched as in Zurich.

Sure we get some more rain at the end of the show but as usual a bit of weather can't dampen the spirits of fans who've waited for this band for so long. 'We've had an incredible 2 years in this country,' says Bono before dropping in another snatch of 'Singing in the rain€¦' during Moment of Surrender.

Were you at our final German show tonight ? Add your own review and upload your photos to our Tour Pages.