'Midnight, our sons and daughters…' 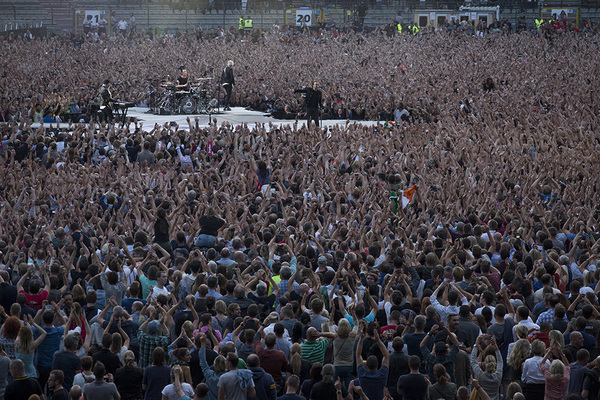 When & Where
Tuesday, August 1st 2017, Stade Roi-Baudouin, Brussels, 33rd show of the year, 12th and final night of the European leg of #U2TheJoshuaTree2017

@bonojour - a younger U2 fan and maybe even bigger Noel Gallagher follower, has been to quite a few shows this leg - writes :
'Looking back at the gig in Brussels I only remember a lot of tears. The first fell the moment I looked at the massive Joshua Tree, took a picture and posted on FB that this was going to be my last show seeing Noel and U2 live. I usually NEVER cry seeing Noel. I compare his gigs with a pub show, where you hang around sipping beer with your best mates and know the people playing songs on the tiny stage. NGHFB is familiarity, friendship and above all a lot of memories and fun. It's songs made to sing along to.
For the last gig I knew I wanted to make a sign, not for him to even have banter at but just for him to read and know. The bright pink obnoxious thing read: 'NOEL + U2 = BROKE BUT HAPPY', broke and happy being highlighted by little stones to highlight the fact that those are keywords in the short phrase. When I held it up Gem (guitarist, for the U2 fans who showed me pics of him and thought they met Noel) started laughing and waited for Noel to read it. Noel's reply was a “Wait, what does that say?” when I put it down too quickly (he's a slow reader, even after my sign training at Lowlands he still needs his time…). He then followed it with “Awww, you're broke and happy? Well, I'm one of those.”
Ignoring the fact that he awwed at me (I'm much taller than you, you twig!!!!), it does sum up Noel's feelings regarding this tour. Many people didn't understand why he'd open for U2. They don't know they're friends, they don't know Noel has gone to U2 gigs since he was 15. They don't know Noel is standing in the back holding his hands up in the air… Noel understands U2, defends them and loves them. And that's what it's about this tour for me. Knowing that your hero shares the same love for that same band from Ireland. And above that, that your hero is just like you, one simple thing in regards of The Joshua Tree Tour. Happy'.

@mrmarkreed was one of the lucky few who were invited as friends & family of fire officers along to the band rehearsal before the Twickenham shows. He has also been to a number of European dates this time around :
'U2 brought the Joshua Tree to Brussels for the last performance on European soil. We said hello and goodbye to many songs for what is probably the last time - the old friends will be missed. Many of these songs have found new life this year, and I hope to see them again on future tours : but if not, we had this. A glorious and unexpected reframing of the songs to make old feel new again.
It's also an opportunity to say 'see you soon' to many friends on the road. And to close the show, and the tour, U2 busted out a rampaging I Will Follow ending where they began, four boys playing rock'n'roll with crazy ideas to make a difference. More importantly, the song is a promise between the band and the audience, where we go, they will follow - and where they go, so will we. The future beckons - the next European tour cannot come soon enough.'

U2Fansites
Remy from fansite @U2Start has seen shows in the US and Europe this time around :
'In what Bono referred to as the capital of a great idea called Europe, The Joshua Tree tour said farewell to Europe. Bono promised us an epic night of rock & roll and boy, did they deliver. From the magic of Bad (one of those truly epic songs, especially with the David Bowie snippets) to the power and rage of Exit (easily one of the highlights of all my 2017 shows) and to the pure energy and joys of I Will Follow, U2 made it a night not to forget.
The four Irish guys on stage kept on smiling during the show and visibly enjoying doing what they were destined to do, making music about so much more than just music. Songs like Running To Stand Still and One Tree Hill had so much emotion, they really hit me. Will Europe ever again hear some of these amazing Joshua Tree songs live? Time will tell, but for now us Europeans can embrace the wonderful memories and wait for what U2 will bring next.
The European shows were incredible and showed to me that The Joshua Tree is an album of us all, a timeless piece of music which connects so deeply to so many different people, all brought together by music./

In The Press
De Morgen: 'From “Bruxelles ma belle” to the American canyons and to the horror in Jordan and Syria: U2 took us on a world tour in the King Baudouin stadium. A Grand Gesture on Tuesday night, with a thrilling show that sent you away shaking and singing loudly…'

What (else) did Bono Say?
“Let's just say right at the start, how proud we are to be in the capital of a great idea called Europe… it's not finished yet… it's a great idea… …we let go of some things… and hold on to some things a little more tightly..”

Review On U2.com
catherinealterman: An amazing night. 'We had an amazing night yesterday in Brussels. We were happy to discover Liam's live performance first. When U2 started with Sunday Bloody Sunday, it immediately brought back a lot of memories and our hearts started to beat faster. It was an intense and fantastic musical journey. And like every good journey we left with the feeling it ended too soon but with, like little kids, star in our eyes and love in our heart. That's what U2 music made to us. Thanks guys for this great show!'

Other Noteworthy Stuff :
Big shoutout to the U2 crew, especially the Belgian tribe, and special dedication to Smasher.
Show dedicated to memory of Sam Shepard.

If you were at the Brussels show, tell us all about it. Add your own review and photos on our tour pages.