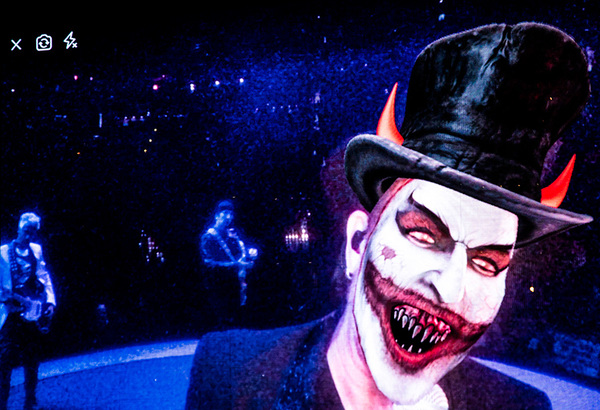 'Desire, Greed, Show-off-iness, Show-off-ines, Vanity...
All the essentials for a showman like myself
… and of course, a license to just look in the mirror...'

Set List
All Because Of You retains 5th spot in the set. A shoutout to Island Records founder 'Chris Blackwell, right in front of you' in Beautiful Day. Vertigo also gets a few lines from 'Born This Way' as a nod to Lady Gaga, who is right up front. Here's the full set list.

In The Press
Bobby Olivier, NJ Advance Media for nj.com
'... Oh, and might as well talk about the music, too. In short, U2 shirked many of its old fan favorites — zero "Joshua Tree" songs were performed this night … The best of the bunch this night was the legitimately pounding "The Blackout," taken on early in the set, with all four band members positioned in the cage and portrayed in flashes of dramatic light and huge silhouettes. The rest of the new stuff all sort of lulls together into the arena-rock mold U2 has defined for itself and a list of other A-list bands over the years. Of course, it's the band's prerogative to perform its new music on its new tour, and U2 is still unquestionably tight and driven— plus Bono's voice still truly soars. But if you're specifically an "old U2" worshipper, just know this before you take on their show at Prudential Center in Newark this Friday: Of 24 songs performed in total Monday night, only five were recorded in the '80s.
But if you're one for tremendous visualizations that will leave you dumbfounded and attempting to describe the complicated set to your friends the next day, then by all means, strap in and check out what the most successful rock band of the past 35 years has cooked up this time. It's certainly something to see.'

On The Socials
@AndrewBank (via Twitter) 'Another transcendent rock production. Deeply reflective while doggedly rejecting the "nostalgia act" label.'

@TimNaftali (via Twitter) 'U2 in NYC tonight sing of love and project hope.'

@peacewillfollow (via Twitter) 'American Soul is legit my second favorite song off of SOE (the first being Love Is Bigger Than Anything In Its Way). But American Soul has a thumping relevance and power that just explodes live.'

Experience(s) Of The Day
edelrodriguez (whose artwork is on display on the barricade screen during the preshow, via Instagram) : 'Bono invited my father and I to U2's sound check today at Madison Square Garden. We've been working long distance for a few months and it was wonderful to meet and chat for a while. Dad turns 80 this year and it was a big thrill for him to watch the band rehearse and meet Bono, we gave him some of my posters as well. We'll be at the garden all night checking out the show!… we had Madison Square Garden to ourselves for about an hour before the U2 show, so dad just laid back and watched the rolling slide show of my posters...'

@bethandbono (a fan of Edel's work, who bumped into him during the show, via instagram) 'This man is so talented and creates all those brilliant screen graphics for the #U2eiTour we love so much! Great to meet you, @edelstudio!'

"The anti-social media. I'm just back from your capital, actually. I love it there… I just love it! So nice to see you all fighting amongst yourselves. Whatever happens, don't mention the "C" word. C-C-Compromise…. New York, just remember this… its when you don't believe I exist, thats when I do my best work…" (as MacPhisto)

If you were at the show, add your own photos and reviews here.