With the release of U2's 12th studio album due and the band still mixing furiously in a London studio - that MOJO are unable to name for fear of an instant fan-siege - Edge called Danny Eccleston at the MOJO office with a progress report.

Mojo report that the album seems certain to be called No Line On The Horizon - although Edge insists that anything can still change, U2 have even been known to record backing vocals in the mastering suite.

He goes on to reveal that they've shelved the songs recorded with Rick Rubin in 2006 and that much of the material dates from sessions with Brian Eno and Daniel Lanois. Confirmed track titles include Moment Of Surrender and Unknown Caller while further mysteries resolved include what happened to those Rubin tunes and what that album title really means...

Read it all in the latest MOJO magazine, or go to Mojo.com for a "director's cut" of the Edge interview. 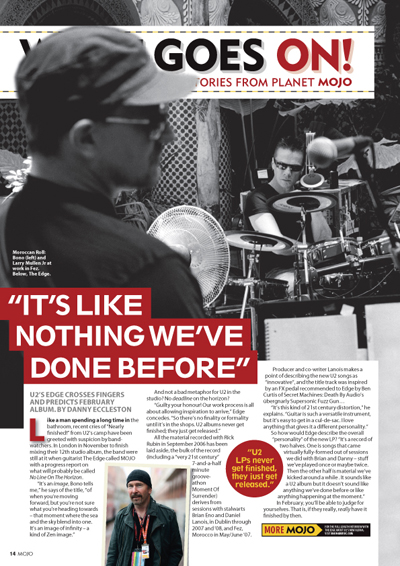 'Moving, funny, poignant and surreal…' You told us about that one song in your life.

No busking this year, but Edge and Bono join Glen Hansard and friends on The Late Late Show.