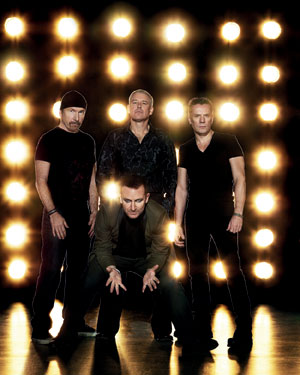 With the album wrapped, the story behind No Line on the Horizon is set to be revealed. First out of the blocks is Q Magazine.

The new edition, which hits the streets later this week, features interviews with each of the band and in a day or two we'll be carrying video of the photo shoot - narrrated by Adam.

'First impressions were that, while the two most recent U2 albums (2000's All That You Can't Leave Behind and 2004's How To Dismantle An Atomic Bomb) marked a return to basics, No Line On The Horizon is more in keeping with the spirit of 1991's Achtung Baby: which is to say, a bolder, more testing collection.

'The material itself runs a gamut from the classic U2-isms of Magnificent, which echoes The Unforgettable Fire's opening track A Sort Of Homecoming in its atmospheric sweep, to the straight up pop of Crazy Tonight (the track Will.I.Am was taking a pass at) and the swaggering Stand Up, wherein U2 get in touch with their, hitherto unheard, funky selves - albeit propelled by some coruscating Edge guitar work, a signature feature of a number of the tracks..."

No Line On The Horizon
©2022 U2.  Powered by Live Nation Entertainment.