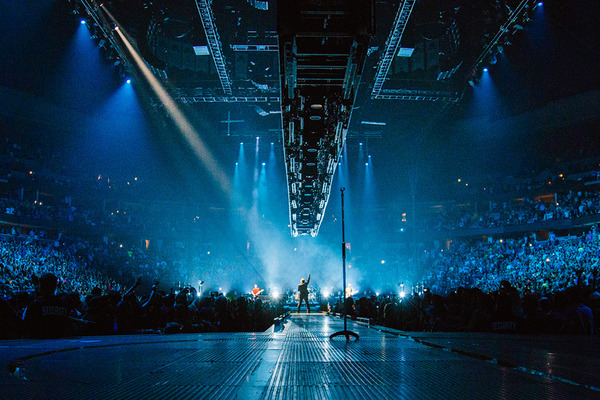 What a reception for the band on the opening night of four in Montreal. And what a show it turned out to be. Here's a few highlights. If you were there, add your own reviews in the comments below.

No better place to start than with The Montreal Gazette. 'The years melted together as the lead cut from last year’s Songs of Innocence segued effortlessly into The Electric Co.’s post-punk convulsion, the Edge’s shock-treatment guitar as unnerving as ever. Bono introduced his cohorts as if this were an opening set by unknowns, and if you closed your eyes, his distressed cries could have  come from 1980.
For a while, this looked like it would be the most unadorned production from U2 since they conquered the world with The Joshua Tree. Vertigo was mostly played under a single oversized lightbulb, sent swinging to the rafters with a hard push from Bono. Then  Iris (Hold Me Close) — for Bono’s mother, and “pour toutes les mamans” — ushered in a sequence of songs tied to youth in Ireland, and triggered eye-popping projections above the catwalk...'

'My god. I'm in tears. Thank you to all U2 fans across the world. I'm shaking. One love to all. Dreams do come true...'
Who said it? Has to be @U2BROTHR  - Mark Baker - who not only lit up the e-stage with his glitter ball hat, but also U2 social media land. It was Marks' life long dream to be pulled up onstage by Bono and for Mysterious Ways and Elevation - tonight's Meerkat moment - the dream came true, broadcast live online.
'There is no person on the planet that I'd rather have on the stage doing the Meerkat thing than @U2BROTHR! Go Mark! ' as @timneufeld put it.
'I knew it would happen, never a doubt...good on ya Mark!' - James (@theeEdge)
'Mirrorball man on stage funkin it up! Love it!' (@amubalt)
'Watching @U2BROTHR live out his U2 dream on stage!” (@BonoJunkie)

'Un, deux, trois...quatorze!' From Vertigo on, Bono seemed to spend more time speaking French than English tonight. Talking of which, La Presse gave the show the thumbs up too - in French.

'High, higher than the sun
You shoot me from a gun
I need you to elevate me here,
At the corner of your lips
As the orbit of your hips
Eclipse, you elevate my soul...'
Elevation was a surprise entry in the set tonight, only the second time on the tour to date. And Ordinary Love again, for only the third time.

One track that's been in the show every night is Every Breaking Wave, a stripped back and unplugged moment with Edge on a piano that rises mysteriously from the floor of the 'e-stage'. Is this going to be the song that's in every night on this tour? It's already finding a special place on #U2ie. As Jennifer (@TheGoalIsSoul) put it, 'Break my heart, Bono. Sing it. Beautiful. The Miss Sarajevo of i e. #everybreakingwave'

Were you at the opening night in Montreal? What were your highlights? How did the show compare to others you've seen? Post your own review and add your photos here