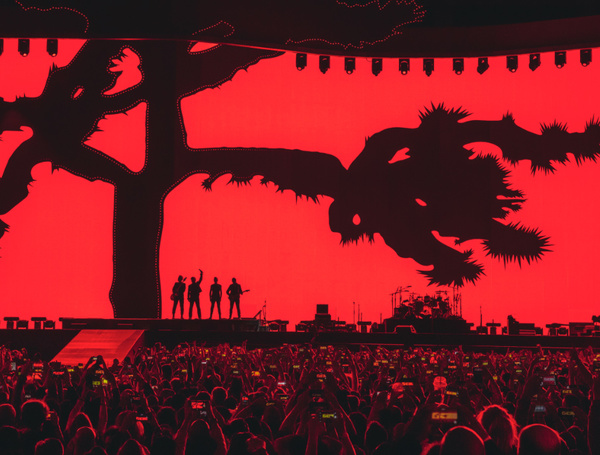 It’s been called ‘the tour of the year’ and the band are set to take The Joshua Tree Tour 2017 to Mexico and South America this year, as well as returning to more cities in the US.

New dates announced today include a run of September US shows which open in Detroit - the city where the band first played a headline stadium show back on April 30th, 1987 at the Silverdome - followed by stops in Buffalo, Minneapolis, Indianapolis, Kansas City, St. Louis and San Diego.

In October the tour will head to Mexico City followed by concerts in Bogota, Buenos Aires, Santiago and Sao Paulo.

For Rolling Stone the show reveals "a live act simply without peer… It really felt like they were reapplying for the job of the best band in the world by showing how they earned the title in the first place.”

The band "not only unpack a masterpiece but provide moments to hold on to forever”. (Consequence of Sound)

Ticket prices start at $35.00 with general admission floor tickets at $70.00. There will be an exclusive priority presale for U2.com subscribers starting Thursday, June 8th (10am) through Saturday, June 10th (5pm) local times for subscribers who may have missed out on the previous presale opportunity along with new subscribers. There will be a 4 ticket limit for subscriber purchases and a 6 ticket limit commencing with public sales. In North America, all floor tickets will be paperless unless otherwise noted. Special guest for the North America concert dates to be announced.

In Mexico and South America, Noel Gallagher’s High Flying Birds have been confirmed as special guest for all dates. Tickets will go on sale Wed. June 14th in Mexico City, June 15th in Bogota, Buenos Aires and Santiago and Friday June 16th in Sao Paulo. There will be an exclusive priority presale for U2 Subscribers at U2.com starting Thursday, June 8th (10am) through Saturday, June 10th (5pm) local times for U2.com. All times local. (Subscribers will be emailed more information ahead of the presales). Details on the Presale page.