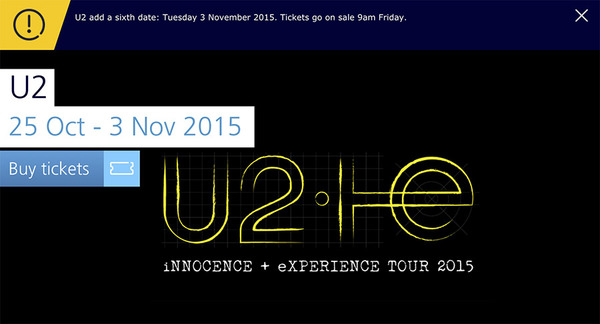 share
With the European and UK tour dates now completely sold out, U2's iNNOCENCE & eXPERIENCE Tour 2015 has confirmed a sixth and final show at The O2 Arena in London, on November 3rd.

The tour will travel through Canada and the US, culminating in eight shows at Madison Square Gardens before it moves to Turin, Italy on September 4th and 5th followed by sold out concerts in Amsterdam, Stockholm, Berlin, Barcelona, Antwerp, Koln, London, Glasgow and Paris.

Tickets for this sixth London show will go on sale this Friday, March 27th, at 9am local time.

Tickets will be general admission on the floor and reserved seating in the stands.

For North America cities where some tickets remain available and for all tour dates, check our TOUR PAGE.