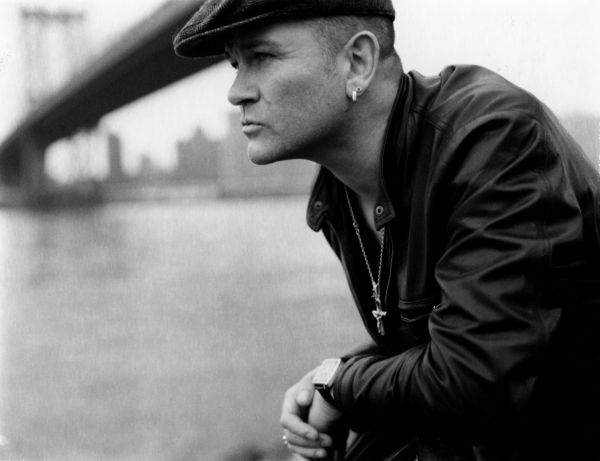 share
Question: What have Laurie Anderson, Andrea Corr, Courtney Love, Lydia Lunch, Maria McKee, Shane MacGowan and Rufus Wainwright got in common with Larry, Bono, Edge and Adam. Answer: They're all fans of Gavin Friday and they're all taking part in a one-of-a-kind show in New York next week, set to raise funds to combat AIDS in the poorest countries.

An Evening with Gavin Friday and Friends, on Sunday October 4th at Carnegie Hall in New York, is curated and produced by Hal Willner, someone with an unrivalled track record in one-off musical events inspired by maverick artists from Leonard Cohen to Kurt Weill, Tim Buckley to Thelonius Monk.

Gavin, of course, has been hanging out with the members of U2 since before they were the members of U2 and is invariably to be found with them in the studio when an album needs to be finished... or out on the road, when a tour is about to kick off. Right now, he's working on songs for his own next solo album due in 2010. We caught up with him in Dublin to find out more about the Carnegie Hall show.

Believe it or not, this was not born in my head. I think I was on some kind of TV show, maybe 12 years ago, and I was asked about my musical ambition and I said I'd love to play Carnegie Hall before I'm 50. That was the seed of all this. Then earlier this year a gang of us went away for a day to celebrate the 50th birthday of Guggi and at the party, Bono, who turns 50 himself next May, said to me, 'Do you know what you're doing for your fiftieth ?' I said I didn't have a clue and that I'll probably run away to avoid the attention. He said he did know what I was doing, that I was playing Carnegie Hall.

A couple of weeks before, Bono had met up with our mutual friend Hal Willner and they'd decided on this event to celebrate my birthday and to raise funds for RED, the organisation which fights AIDS in Africa. And I was so taken aback at the idea that a very rare thing happened - I was completely silenced. I couldn't believe it. I think everyone found that quite humorous: 'Look, we've actually shut Friday up!'

Hal Willner is the moving force behind the whole thing, he puts these kinds of events together and I've often worked with him on them. They're like creative extravaganzas where a whole gang of musicians come together to pay tribute to someone, like he did this incredible homage to the work of Leonard Cohen, another to Kurt Weill. More recently Bono and I worked with him on 'Rogue's Gallery' an album of pirate ballads and sea chanteys.

There's always this extraordinary twist that he brings - like his tribute to the music of Walt Disney where he had Tom Waits singing 'Hi Ho Hi Ho' and when we did it live, he had me singing the 'Siamese Cat Song' from Lady and The Tramp. I remember turning up one day for a Harry Smith tribute to find Jimmy Scott, the jazz singer, at the piano with Mary Margaret O'Hara and Nick Cave. Two days later we were performing it on stage.

We've already got an amazing bill lined up for Carnegie Hall, I can hardly believe it. We talked about the kind of people we wanted to take part - those who influenced me over the years and some that I might have influenced. Some are very well known and some I hope will become more well known - like Eric Mingus, an unsung genius and the son of Charlie Mingus. Or Flo and Eddie, who many people don't realise are the backing vocalists on all those great T Rex songs that people like me remember from being young.

Anthony from Anthony and the Johnsons will be something else and then Maria McKee, what a talent she is, and goes way back with our musical community in Ireland. She's always been close to us, she lived here in the 1980's and we often recorded with her. And Courtney Love, Hal bumped into her in New York and she said she'd love to be part of it. Laurie Anderson doesn't need any introduction and we've also got Rufus and Martha Wainwright and, not surprising this, a big Irish contingent with Shane MacGowan, Andrea Corr and of course the Royal Family - Larry, Edge, Bono and Adam.

The thing with those four is that I know them all individually, so they're all taking part but what's unusual is that they aren't going to be U2, so I think we'll see something pretty different, which is something that always happens with Hal's events.

Dik, Edge's brother will be there, who was in U2 before they were U2, and Guggi of course, so I would love Dik and Guggi and myself to do some Virgin Prunes songs - it won't be the Virgin Prunes reuniting because we don't do that, but let's see what happens. When Hal is involved you never know how it'll work out.

He pulls together this potpourri of musicians for a day or so of rehearsals, which are like this musical workshop, very organic, where you never quite know what you're going to produce. The spontaneity is what I love about it, it's precious and so rare these days, when everything is over-rehearsed and over-marketed. The next day you have a soundcheck and before you know it you're playing live in front of an orchestra and an audience.

I still don't know what to say about it, I'm 50 not 80 and I'm not an icon but it'll be a celebration of music and a beautiful thing to do for a friend. Hal for me is a real touchstone of a person, an inspiration and he creates quite unique musical moments, It won't happen again, this collection of artists won't be together like this ever again... which I love. It will be an unrepeatable night and I'm planning on enjoying it.

Collaborations, Highlights, Interviews
U2
©2020 U2.  Powered by Live Nation Entertainment.