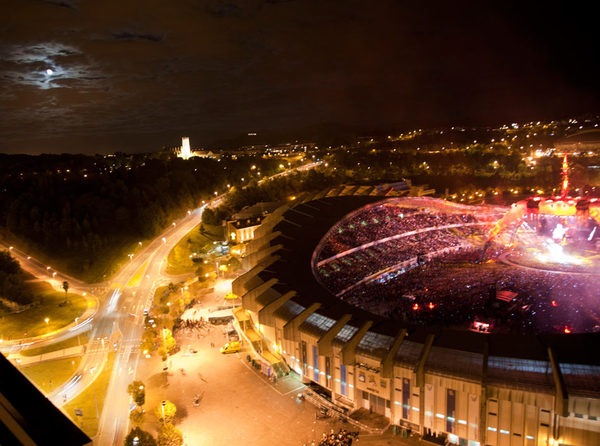 share
'Thirty four years ago yesterday, I got to meet these guys: so it's a birthday of sorts.'

And we had a bit of a celebration in San Sebastian tonight, with the 360 debut of Spanish Eyes - written and recorded during the sessions for The Joshua Tree -  and another bow for the beautiful 'Mercy', with a shout-out to Terry Lawless ('down in underworld').

It's cold in Spain tonight but this Spanish audience have no problem staying warm and with a new, extended intro to Vertigo the show really takes off. (Great thing about this show? The number of times a song arrives unexpectedly to send things up another gear... just when you think you're already in top.)

'Muchos gracias,' says Bono at the end of With Or Without You. 'Let's do the magic trick one more time, let's take out our phones and turn this place into the Milky Way.'

And with countless phones illuminating the stadium floor and a beautiful moon hanging in the dark sky above, the whole 360 scene in Spain looks pretty amazing.

Most are on our tour page where you can add your own review and upload your photos if you were there tonight,

Others are on our boards like this by one of our long time members: 'The big highlights for me were Magnificent, Spanish Eyes, Mercy and Vertigo (Bono jokingly offered the crowd some Spanish lessons.) Magnificent is still one of my fav songs of the show. The pounding bass elements and Edge's organy guitar line are pure fabness. (I'd love it if a hard trance DJ could take these to make a whomping club track.)

Spanish Eyes was a great surprise, and took me a few seconds to recognise, although many of the people around people clicked immediately what it was and gave a big cheer. It was rough, raw and bloomin brilliant. I sooo hope they keep bringing back old gems like this.'