'The Saints Are Coming' in New Orleans 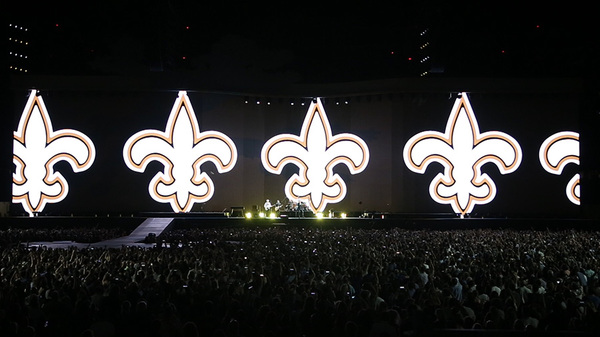 The Saints Are Coming
It’s hard to believe that almost 20 years have passed since the Popmart Tour and the last full U2 show In New Orleans, in the previous version of this very stadium on the 21st November 1997. There have been some remarkable visits to NOLA by the band in that period; the unforgettable Super Bowl half time show back in 2002 and the re-opening of the Superdome in 2006 to name but two… and the spirit of that show was invoked tonight with the addition of an impromptu couple of choruses of The Skids ‘The Saints Are Coming’ (recorded alongside Green Day for Hurricane Katrina back in 2006) during ‘Vertigo’, and various audio & visual references throughout the night to the ongoing situation around all-too-recent Hurricane’s Harvey & Irma. Special mention was also made of the work being done in that regard by the band’s own ‘local hero’ (as Bono described him tonight) - The Edge and his work with other local musicians and the Music Rising Campaign.

Social Posts
@theboyonthebike (via a twitter triptych)
‘New Orleans-where can you find more soul? Sex & spirituality, voodoo & Catholicism-two sides of the same coin’. ‘U2always brings soul, but in NOLA-where there is so much here already-a U2 show is a combustible thing’. ‘I didn't fall in love with NOLA until I experienced life on the underside. This is the city where "after the flood all the colors came out.’

@zoostation89 (via twitter) :
‘The boys brought their A game. My last show of the tour was so worth it!’

@kvancil (via twitter) :
‘We are ONE & last night all of us were there the left, right & middle! common ground was euphoric thanks #U2TheJoshuaTree2017 #U2’

In The Press
'U2 welcomes both the left and the right to the Superdome in epic night':(The Times Picayune) 'Bono, the charismatic front man of the superstar quartet U2, pledged that Thursday's (Sept. 14) show in the Mercedes-Benz Superdome would be "one of those nights none of us forgets," an "epic night." Ask any of the thousands of rock fans that filled the big arena: U2 delivered on their leader's pledge. Bono may be as well known for his philanthropy and social activism as his music, so it was no surprise that the show was sprinkled with pithy political statements between the songs. Still, Bono made an effort to remain inclusive and non-partisan.

In the aftermath of the song "Pride (In the Name of Love)," he declared that whether his fans were "from the left (or) from the right, you're all welcome here tonight." Though he's Irish, Bono infused the show with a sort of informed American patriotism. The United States is "a great country in a difficult time," he said. The concert ended with an 8,000-square-foot American flag glowing on the LED screen behind the stage. Referring to the historic migration of his countrymen to America, he thanked the United States "for giving the Irish safety and sanctuary." America, he said, "had always been a sanctuary" and he hoped it stayed that way. On the subject of immigration, he cited New Orleans as "a kaleidoscope of cultures, music and good looking people." After the song "Trip Through Your Wires," Bono shouted out to U.S. Rep. Steve Scalise who is still recovering from the impact of an attempted assassin's bullet. "We wish him continued strength," Bono said. The revered rocker never mentioned President Trump directly in his asides, though a black and white snippet from a 1950s television show projected behind the stage seemed to be implicitly critical of the president's policies. The western drama "Trackdown" depicted a carnival soothsayer named Trump, who foretold the end of the world unless he was allowed to build a wall around town.

In 2006, U2 was among the bands who performed during a celebration of the repair of the Superdome after Hurricane Katrina. Bono recalled the use of the Dome as a refuge for flood victims. He called it a "sacred bowl" and "a place of shelter." Certainly one of the most moving parts of Thursday's show was when he called on the crowd to illuminate the interior of the Dome with sparkling iPhones, as he led in the singing of Paul Simon’s longing refrain ‘we’ve all come to look for America’

Bono expressed his devotion to New Orleans time and again during the concert. In a passage dedicated to feminism, five-story-tall portraits of chef Leah Chase and civil rights icon Ruby Bridges appeared behind him. He shouted out to Jazz Fest producer Quint Davis and to Troy "Trombone Shorty" Andrews. He led a Saints chant, as black and gold fleurs de lis blossomed on the big screen. U2 is an international act, but the show had enough local references to be tailor-fit for us.

If you missed the concert, here's the rundown: The band kicked off the two-hour show with the stirring anthem "Sunday Bloody Sunday" and a handful of other past hits, then played their breakout 1987 album "Joshua Tree" in its entirety. After a very brief intermission, they returned for another mini concert including an intimately performed new tune titled ’You’re The Best Thing About Me’. The sound in the big Dome was beautifully clear (at least where I stood). The gorgeous images of desolate highways, desert-scapes, and other scenes that filled the giant screen behind the band helped set the mood for the songs without becoming too much of a distraction. Bono and his bandmates, all of whom are in their 50s, played with passion, but were utterly dignified doing so. Those of us on the floor certainly had the best spots in the house. When Bono and the band performed on the runway that jutted to the 50-yard line, we could see them pretty much as well as if they'd played a Frenchmen Street club….'

If You Had To Pick One Song
Got to be Vertigo with ‘The Saints Are Coming’ ending and crowd singalong. “We should figure out how to do that… that’d be good.. thats a tune!” quipped the singer afterwards.

What (else) did Bono Say?
“Those on the left and right and in between, you’re all welcome here”

“We must stay awake to dream… even in God’s Country”

“First time ever he moves on to the Fender Stratocaster to play I Will Follow… Miracles can happen in New Orleans!” This local hero happens to be in our band, and he is The Edge… After Katrina, he couldn’t bear to live with the idea of you (in New Orleans) without your musical instruments, without your rhythms… so he set up Music Rising… We feel the same about Texas & Florida.. & we’re working on that…

Reading from a letter ‘from the people of New Orleans to the people of Texas after Hurricane Harvey:
“In my darkest hour we found peace and a scorching bright light of hope with our friends in Texas… and we hope you’ll find the same in us. Our doors are open, our clothes come in every size, there is hot food on the stove and our cabinets are well stocked. We promise to always share what we have”.

Review On U2.com
Jamie_Haeuser16: 'New Orleans Loves U2!'
I'm a native New Orleanian, and deeply appreciated how you shaped the show to connect with us. On top of the Edge's incredible commitment, you're all honorary citizens. Still thinking about the show. Still moved. Extraordinary. The visuals were astonishing. So was your capacity to make the Superdome feel like an intimate space. The use of robotic cameras made the Dome feel small. Above all, the content of the performance. So many many elements that referenced New Orleans, and a specific call out for donations for Harvey. Bono reading the letter we sent to Texas. And the Herstory segment made me weep. People keep using the word spiritual, and it certainly was, but it was more. It was community, bonding, acknowledging differences, but coming together. Oh, and "Saints."

Other Noteworthy Stuff
Third ever full show live performance of latest single ‘You’re The Best Thing About Me’. Shouts outs to local musician legend Dr. John and all 3 brothers Hanson (who are in the house). At one point Bono handed the microphone over to Edge who gave some shoutouts of his own : “the local music scene itself… Trombone Shorty?.. Clint Davies?.. Mr Jazz Festival….'

Were you at the show at the Mercedes Benz Superdome in new Orleans? Tell us all about it. Add your own review and photos on our tour pages :