‘They were calling even me...' 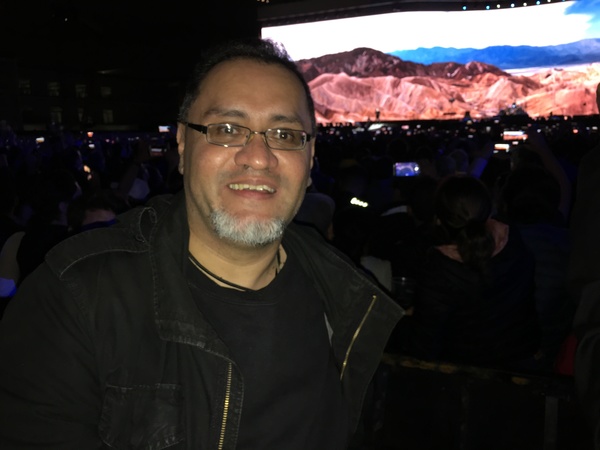 Cathleen Falsani talks with longtime Zootopia moderator Max Tsukino on how everybody ‘started dreaming of a U2 show in Mexico'.

Max Tsukino vividly remembers the first time he heard U2’s music as a teenager in Mexico City—a moment he says forever changed his life and the way he understands the world.

It was the early 1980s and MTV had not yet arrived in Mexico. However, much to the delight of insatiable fans such as Max, perpetually hungry for new music, every Friday night a local TV station aired music videos they had pirated from the American music channel.

‘One night, I went to a friend’s home to watch the show, that started with the Rolling Stones and this and that band. And then [the host] announced a video from U2. It was ‘Gloria’, Max recalled, the day before the band’s two-night stand at Mexico City’s Foro Sol. ‘Maybe it was a little bit corny—you remember the video—they were playing and people started to come. They were on the docks and people came to them. They were calling to them. And in a way, I felt that they were calling even me.’

U2 quickly became the ‘cult band’ favorite amongst the Mexican hipster teen set, Max said. ‘Everybody was listening to them. All the cool rock kids, as opposed to the pop kids’ who were into Duran Duran and the like, he said. ‘With the Joshua Tree, U2’s popularity in Mexico exploded.’

Mexican fans even started dressing like the band’s iconic vocalist. ‘There was at least one Mexican Bono in every class in every high school in Mexico,’ Max said.

‘The Joshua Tree’ album dropped on St. Patrick’s Day 1987, but wouldn’t arrive in Mexico City record stores for another few months, he recalled. Luckily, Max had a friend who worked as a nanny in Chicago. She recorded the album on a cassette tape—‘On one side was Bryan Adams’ ‘Reckless’ and on the other side was ‘The Joshua Tree’’—and she sent it to him in Mexico.

‘We listened to ‘Reckless’ and it was OK. But then we listened to ‘The Joshua Tree’ and we were completely blown away. It was nothing we were expecting from U2. The sound was really new. ‘Streets’, what can I say? ‘Streets’ is magical. And the next song and the next song,’ he said. ‘Everybody started dreaming of a U2 show in Mexico.

Unfortunately the band didn’t make it to Mexico on the original Joshua Tree tour. ‘I remember hearing ads on the radio for the concerts in Texas,’ Max said, ‘and asking my mother if I she would’ let me go.’ (She wouldn’t.)

When their film ‘Rattle and Hum’ opened in Mexican theaters, fans flocked to see it, often numerous times. Max reckons he saw it at least a half-dozen times in the theater. ‘Here in Mexico, it was the closest thing we had to a live show, and it was glorious.’

Mexican fans had to wait until the Zoo TV tour in late November 1992, when they played four shows at the Palacio de Los Deportes in Mexico City. Max heard the news via Mexico City’s Rock 101 radio station, which interrupted its regularly scheduled broadcasting when the tour dates were announced: ‘U2 is coming to Mexico!’ Max was there.

The last time the band performed in Mexico was the 360° tour in 2011—three nights at the Estadio Azteca in the nation’s capital, but Mexican fans remain as devoted and passionate as ever. The GA queue for the Foro Sol shows started a week ago—and would have started even earlier were it not for the 7.4 magnitude earthquake that struck the city on September 19, Max said.

‘They are huge, huge, huge here,’ he said, reflecting on the band’s massive and enduring popularity Mexico. ‘When Bono mentioned the earthquake in Mexico City at the shows last month, it was all over the news here. On every TV station. Everyone knew.

‘I can’t really explain why U2 clicks with Mexico but they do,’ Max continued. ‘The band for many of us are people we look up to who tell us how it is…They give us hope in hopelessness.’

Following the band members’ lead, like many Mexican fans, Max got involved with social justice issues, and was an active member of Amnesty International for many years. ‘It’s like Johnny Rotten said, ‘Anger is an energy’. But don’t just be angry. You have to do something with it. Do something.’

Max saw The Joshua Tree 2017 show in Toronto and wanted to attend the gig in San Diego, but was denied a visa to travel to the United States. A freelance graphic designer by trade, his visa application for travel to the U.S. has been turned down four times in recent years. But he’s visited Ireland three times and saw the band perform their legendary show at Slane Castle live in 2001.

‘I think the shows in Mexico City this week will be cathartic, especially ‘Bullet the Blue Sky’ and ‘Exit’ with The Shadow Man’, Max said. ‘We matter. We Mexicans matter.’