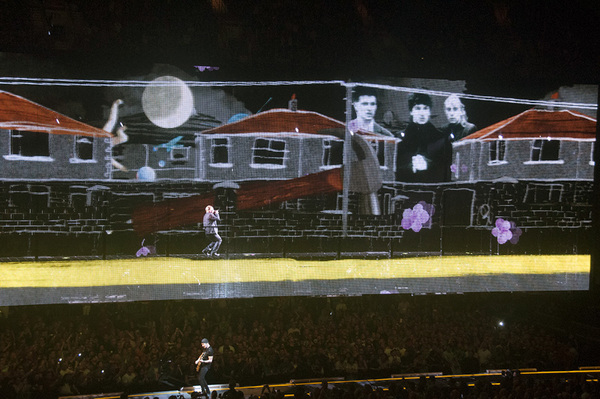 'The most beautiful sound in the world!' Sounded so loud last night as the capacity audience at The Forum chimed in on the opening call and response of 'The Miracle of Joey Ramone'. Seconds into the third night of U2’s LA 'residency', and this crowd were out to be louder than any predecessors.

Before' Iris (Hold Me Close)', there was talk of L.A. resident The Edge leaving 'blood on the dance floor' after the band’s club gig the night before at the Roxy, as well as Bono’s recent trip to the famed Canter’s deli. U2’s love for L.A. was proclaimed - all of L.A. - downtown, the valleys, the canyons, and its feeling of 'what might be'. With that, the 17,000 or so Angelenos in attendance were transported back to the north side of Dublin, to Cedarwood Road, the era of Song For Someone, Sunday Bloody Sunday and Raised By Wolves. The breathtaking imagery on the great divider screens once again transformed The Forum into a magical place where these universes coexisted.

Amp was back tonight. The turban-wearing New York doctor, who was out in Vancouver for the opening shows, was pulled up on stage in his 'HAMMER(RED)' shirt for some theatrical shadow boxing with Bono during 'Mysterious Ways' and then kept his moment in the spotlight to turn cameraman - shooting the Meerkat fancast moment with the return of 'Elevation' to the set list.

The brotherhood and sisterhood of the U2 community, it's 'sacramental friendship', was again underlined with another moving homage to Dennis Sheehan in the intro to 'Stuck In A Moment That You Can't Get Out Of'. And at the end of 'With Or Without You.' 'Goodnight Dennis Sheehan...'

Anyone get the feeling this tour is starting to become a little special. As @JeffReinhart77 put it on twitter, 'Already pushing Zoo as top tour. Seriously. Incredible stuff #U2ieTour'

If you were at the third show at The Forum, add your own review and photos here.