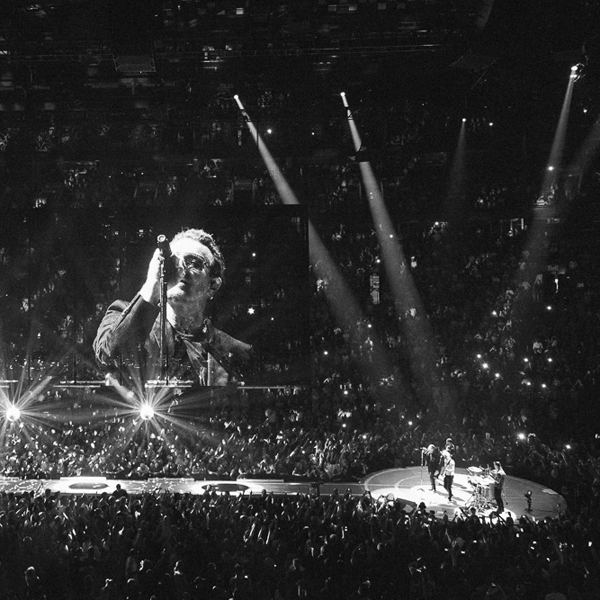 'Your eyes were like landing lights
They used to be the clearest blue
Now you don’t see so well
The future’s gonna land on you..’

Volcano erupting in Stockholm for the opening night in Sweden. They don’t play it that often but it’s always a blast. 'Volcano sounding better every time they play it!’ tweeted @tegod 'Do U live here or is this a vacation... #U2ieTour #U2Stockholm’

'It is a thrill to be here,’ said Bono, catching his breath before introducing Iris. 'I don't know why but this band always feels like we're on our holidays when we're in Stockholm.
Seriously …The Edge wants to go fishing in the archipelago visiting the arctic circle to measure things ...he does love measuring things ...don't you The Edge?
Adam wants to go shopping on Library Street - bibleeoteksgothan - is that how you say it? - for girl’s underwear. I mean not for himself - but for his wife... and sometimes mine!
Larry wants to trace his family history. Yes Larry Mullen is convinced that his blond hair is a Viking throw back. I'm not convinced he's Swedish but I am convinced he's a Viking alright…’

And then the band took us back to the northside of Dublin for Iris and Cedarwood Road and Song For Someone.

Lucy from the Czech Republic was up on stage for Mysterious Ways and to broadcast Elevation around the world. ‘What’s next the Edge?’ Next, said The Edge, was Volcano…for only it’s eighth outing of the tour. Then came Every Breaking Wave ( ‘Theres no them.. there’s only us… and our enemies became more difficult to figure out as we realised that some of the biggest obstacles in our way were actually inside us… in us… and even love got complicated…’) before October, Bullet, Zooropa, Streets and Pride… this new European sequence rapidly finding legendary status among the audience.

@u2gigs picked up on the lyrics in Bullet tonight, ‘In the howling wind the bullets rake the blue sky, as refugees flee so that they might not die’

'Bullet keeps getting more & more angst filled and rage driven.’ added @ClaytonsKitten. 'This band is playing like they have something to prove.'

And then ‘Streets’ which, as @maxtsukino captured it, ‘is like opening a can of hope…’

If you were there tonight, add your own review and post your photos here.