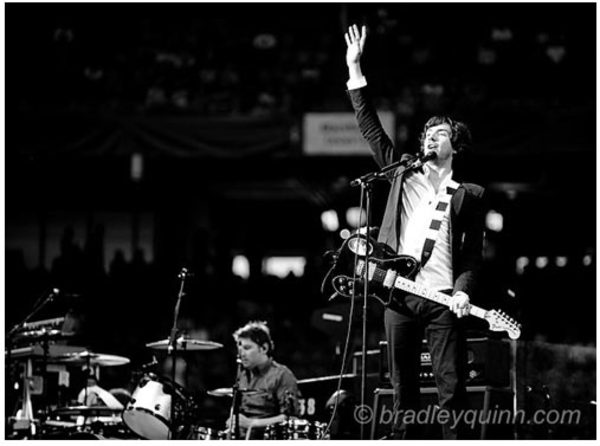 share
Snow Patrol have played more dates with U2 on the 360 Tour than anyone else and they're back for three more in Mexico this week.

Singer and mainman Gary Lightbody, who first wrote us this great piece after the show in Poland in 2009,  again mused  on life on the road with U2 ahead of the Istanbul show  last Autumn: 'A good time to say our thank yous for a tour like no other.'


'We are not U2. That is one of the things you learn from touring with them. We may have an amazing experience entertaining their audience on their stage but we are merely borrowing their space and time. We may think ourselves pretty damn special walking off that stage some nights, most nights truth be told, to the cheers and the raised arms of a crowd won over. We may think ourselves indestructible and we may think ourselves, as my father would say, quite the thing. We'll go back to the dressing room and hug each other as we do (we're friends you know) and talk of the battle victorious and 'did you see the girl with the banner that said 'something something snow patrol something' and I'll take a shower and in fresh socks and pants consider myself king of the castle. Then, buffed and shined, I'll find my way to the mixing desk in time to see four men from Dublin stride out onto the circular and towering stage we have not but half an hour ago graced.

Then comes the noise and the lights and heartbeat in my throat and the arms aloft in front of me of a heaving crowd at worship and I think to myself - EVERY SINGLE TIME I SEE IT - I think... FUCK ME!

We are Snow Patrol and we are on tour with the biggest band on planet earth. Except we're not for much longer. So I thought it a good time to say our thank yous for a tour like no other with some of the finest people we have met in music. The band, their crew, their management, the caterers, everyone on the tour are all the finest sorts of people. The kind that welcome folk, folk like us I mean, (I'll stop with the cowboy talk now) with the kind of ease, grace and humour as we've rarely experienced. We've supported many bands before. Many have treated us right well too (Supergrass, Travis, Grandaddy, Athlete, to name but a few), some that did not (nameless they'll remain but you're curious I can sense. I'll never tell. Even under torture. Actually under torture I'll tell. In fact I'll tell with just the threat of torture but not now).

It is those that did not treat us well though that make it all the more incredible that U2 treat their supports with such warmth. If the biggest band in the world does it like this then EVERY BAND should. We have pretty much modelled our ethos on theirs and to an extent our music too (some would argue a little too closely, ha) and we have learned so much from seeing it all happening up close. They've had plenty praise, and justified too, from far greater men than me though so I'd like to simply say we'll never forget this 360 tour and thank you guys - Larry, Adam, The Edge and Bono - for making room on your spaceship. It's been magical.

A massive thank you to all the crew who looked after us and our own crew like we were part of the family. I know our boys and girls on the SP crew would want me to say how much you've helped them and made things so easy and seamless. You're all fucking legends. A special mention has to go to Rocko who, given half the chance, we'd steal and keep forever as our fearless leader. My friend you are our brother for always.

Thank you also to Paul, Susan, all the management and all the beautiful ladies that work for the guys. You're all amazing. I've never seen anyone work so god damn hard! Thank you so much for everything. And to the people that have fed us every show for off and on a year now. My god did we eat like kings? Did we ever. We're sure gonna miss solid food.

Also a huge thank you to all the U2 fans that gave us the time of day. It's a tricky thing to go on before them because we know how long the people in front of us have waited and we are the only other hurdle before their prize. That being said every crowd, everywhere, has treated us brilliantly. You've sung and cheered and shown us love. We'll maybe see some of you along the way at our own shows.

Friday night in Athens I finally got (took me long enough!) why Bono is fond of saying 'What time is it?' and 'Where are we going now?' in between songs. They have created a show, an experience, that seems to lift off from the ground and take you on a wild, woozy ride through time and space. It is, though, no blissed out acid trip, quite the opposite. It is a galvanising, humanising journey with 80,000 other people all sharing the same ride and becoming closer for the sound, feel, touch and thrill of it.

I was, each night, as thrilled as anyone in the audience to bear witness. When I think back on this tour the one image that will resonate with me til I die is that of the upturned thumbs and fingers and green ribboned hands making the heart sign as the opening, rallying drums of Sunday Bloody Sunday thunder out. That 'heart in the hands' is the symbol for this whole experience for me. It is our last show tomorrow night in Istanbul and we are very sad to be leaving but we'll carry the heart of this tour with us gently in our hands. Again, and forever, thank you.