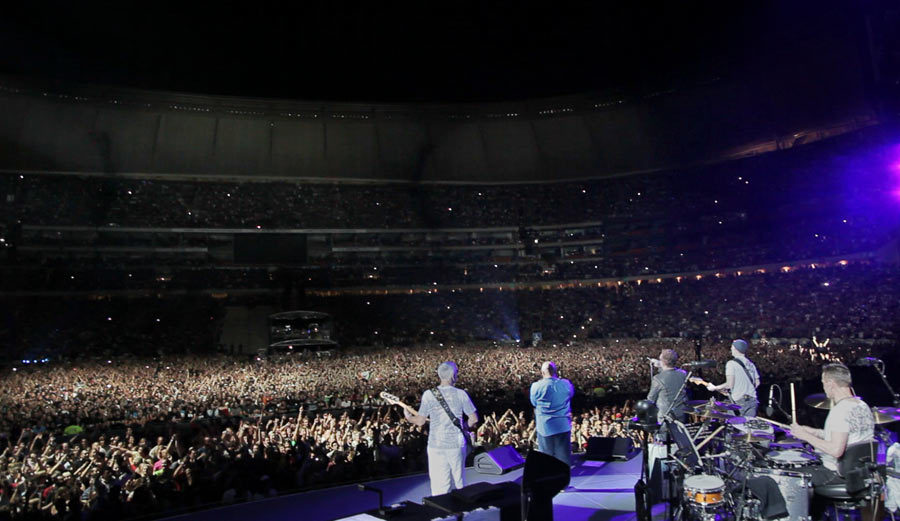 And 21 years after Nelson Mandela gave a speech in this very stadium (the day after his release from prison) when U2 played 'Pride (In The Name of Love)' tonight, the huge screens over the stage were illuminated with Mandela's image, along with excerpts of that famous speech. Bono sang a new lyric.

From the opening bars of Beautiful Day, this record-breaking audience - the largest crowd ever for a sporting or entertainment event in South Africa - were shaking the foundations of the FNB stadium, and the unique atmosphere barely relented all night. 'Rainbow people' was right, as Bono had christened everyone (borrowing Desmond Tutu's phrase) at the top of the show.
'We know Jo'burg has a night life,' he said, introducing 'Crazy'. We know Jo'burg needs to go a bit crazy...'

Jo'burg did go crazy, as the band mixed the set list up again for this opening night of U2360 in 2011.There were new production elements too, and a great reception for references to recent events in Egypt. The 2009 images of the popular uprising in Iran, which have accompanied Sunday Bloody Sunday on the tour so far, gave way tonight to images of people power in Egypt. 'Change of heart comes slow...' sang Bono. Prayers to for the people of Burma.

As for South Africa, 'this place just feels like the future,' said Bono, visibly amazed at the overwhelming reception for the band's first dates here since PopMart in 1998. And judging by the torrent of online excitement from fans at the show - and following around the world - it will be a night that lives long in the memory.

'Unbelievable. I am spent.' said Starverve on the live show stream on our community page. 'Best concert of my life.'

If you were at the show tonight, add your own review and upload your images on our Tour Page. And check out the complete set list.