Set List Not everyone was expecting the opening: @stuloeser (via twitter) ‘Sunday Bloody Sunday open, followed by New Year's Day. Don't remember either on my Joshua Tree cassette but still great!

‘Not sleeping… not in New Jersey tonight’ as the lights were lowered by WW, and the stars around the stadium shone through Bad, into Pride, felt big time by @eddiequinone586 (via twitter) and those around him: ‘upper deck of @MLStadium is fucking shaking during Pride’ Then came The Joshua Tree, eleven tracks, in sequence, works every night. Encore like this: 16. Miss Sarajevo 17. Beautiful Day 18. Elevation 19. Vertigo 20.Ultraviolet (Light My Way) 21.One 22.The Little Things That Give You Away

Social Post(s)
@tuneintogoonan (via twitter): ‘Had to literally put my phone away to witness the visual show U2 just put up for Bullet The Blue Sky. Awe inspiring”.

@chrissobel (via twitter): ‘Waited my whole life to hear Exit live. It was an out of body experience’

Upon completion of The Joshua Tree, Wednesday night's long anticipated album of honour -- Bono, The Edge, Adam Clayton and Larry Mullen Jr. joined at centerstage, as would a post-curtain theater troupe.

"Thank you, these songs are more yours than ours now," Bono said to the cheering crowd at Metlife Stadium. There may be some truth to that note; when U2’s fifth LP was released in March 1987, it was hailed almost immediately as the band's masterstroke -- a sharply penned project detailing the band's fascination with American culture -- and in its 30-year wake, very few rock albums have enjoyed the same triad of success: universal critical acclaim, commercial dominance, and adoration from diehard fans, who wouldn't dare say the band's sole Diamond-certified record was some sort of "sell-out." ... U2 reclaimed its most lauded album Wednesday, courtesy of an anniversary tour that reignited all 11 "Joshua Tree" tracks in sequence, and bolstered them with a level of grandiosity few other acts have the means to attempt. The historically visual-savvy four-piece was backed by an immense, 200-foot-wide LED screen, with a 45-foot-tall Joshua tree etched into its center. A mirror image of the plant jutted out from center stage, the trunk acting as a runway to the shrub-shaped second stage, where the two-plus-hour performance began. The band first ran easily through a few favorites, the most moving being 1984's "Bad," before the huge screen lit up desert red, summoning the start of the album-dedicated show in earnest. U2 returned to the main stage and off they went, into an album that begins with three enormous hits in "Streets," "Looking For" and "With or Without You."

The former was the night's most electrifying high. The Edge's chiming guitar delay whirled around the stadium while Bono's still-impressive vocal soared effortlessly through the chorus. An impossibly high-def video of a rolling desert road played on the screen behind. Per the album's original theming, uber-American imagery was often cued up: lassoing or painting stars and stripes on an old house. "Songs are mysterious things," Bono said before "God's Country." "You think you know them but not really. They surprise you."

If You Had To Pick One Song
@danastar78 (via twitter) : ‘I LOVE the vocal arrangement on @U2 Red Hill Mining Town for #U2TheJoshuaTree2017 @Sillywhite - it is PERFECT!

What (else) did Bono Say?
As the crowd sung the end of Pride and it faded into Streets: “…Maybe the dream was just telling us to wake up. Awaken, the America of community, compassion… of sanctuary and safety. Justice and joy… tolerance and protest”. Right after Red Hill Mining Town: “Welcome to Side 2 of the Joshua Tree… just flipping the cassette over.”

And if you were at the show tonight, tell us all about it. Add your own review and photos on our tour pages. 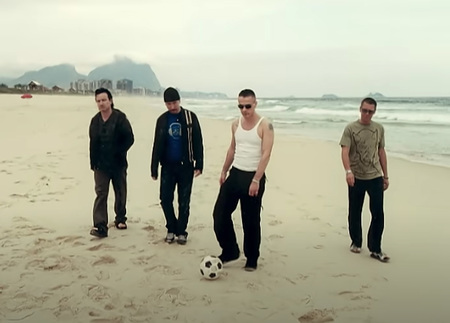 From the beach in Rio, now remastered in HD, Walk On.