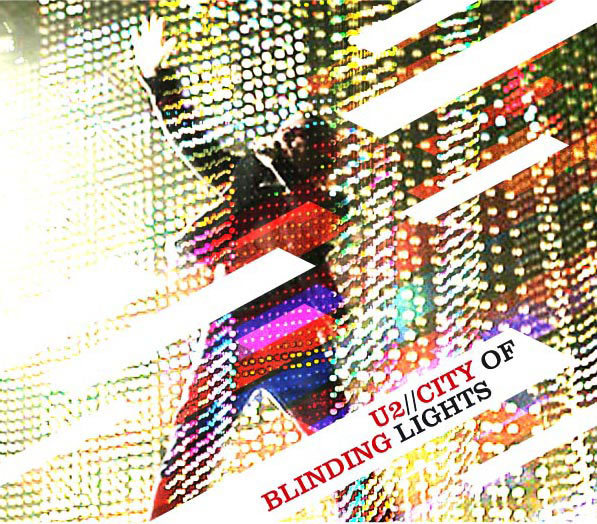 share
City Of Blinding Lights was the opening song on the opening night of the 'Vertigo' tour in San Diego at the end of March 2005 - and it's been bringing down the house ever since.
As the tour progressed, this opening track was greeted not just with the band's arrival on stage but also with a million pieces of glinting confetti falling on the audience from the roof of the venue. It's live performance soon became one of the most hotly anticipated tracks from the new album during the tour - it had long been a favourite of the band.

'I went to see Anton Corbin's exhibition, a museum show in Holland and he hadn't told me but there was a room full of giant photographs of the band and a lot of me from when I was very young, and he put me in to the room and I was like 'Just get me out of here!'

And then I saw this photograph - I guess I would have been 20, 21 - getting into a helicopter, the first time I'd ever been in a helicopter, first or second video we made, and it was New Years Day, and we're just about to take off. And I saw this face, and the face was so open and so empty of complications and so the naivety was there and it was so powerful, and this Dutch journalist came up and said, 'Bono, what would you say now to this Bono back then, have you anything you would say?' And I was trying to think what I would say, and it kind of just came out of my mouth, I said, 'I'd tell him he's absolutely right, stop second guessing yourself.' Back then I didn't know how powerful that naivety was, I didn't know how powerful that innocence was so I was trying to rid myself from it, I was trying to set fire to myself, and get rid of this, become a more worldly person, become a man of the world, and of course the less you know, the more you know, sometimes the less you feel, and really understand.

So 'City of Blinding Lights' came right out of that moment for me, it's a story of innocence and experience and the chorus is set in one of the greatest moments for me ever on the stage when we were the first band to play New York City, after 9/11 and we turned on the lights, during one song and I just saw twenty thousand people, just their eyes wide open, and tears just rolling down their faces and it was an amazing moment for me, musically, and I just shouted out 'Oh you just look so beautiful tonight'. And so that's become this song.'

Bono, describing some of the influences behind the writing of City of Blinding Lights.