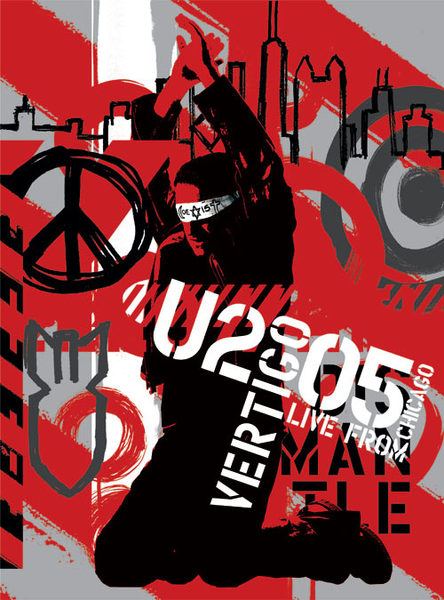 share
Opening with 'City of Blinding Lights' from 2005's How To Dismantle An Atomic Bomb and closing with '40' from 1983's War, this live DVD was filmed at the United Center Chicago on 9th and 10th May 2005, and directed by Hamish Hamilton.

The Deluxe DVD spans two discs: the full live show plus an additional disc of bonus material including Beyond The Tour, an intimate behind the scenes documentary. As well as this came the 'surveillance cuts' of the Chicago show - filmed using four remote controlled black and white infra-red surveillance cameras, the footage offers a totally different perspective on the show.
Released Date:
14 November, 2005
Produced By:
Directed by Hamish Hamilton
Engineer:
Label:
Universal Island
Recorded At:
Filmed at the United Center Chicago
IMAGE + VIDEO
ALL ALBUM VIDEOS
All Because Of You

'We had a couple of sets which would change from night to night. We were playing seven or eight songs from the new album and five or six from Boy, which only die-hard U2 fans might be familiar with.'
(Adam)

'Those songs were speaking to us again, they felt relevant What was interesting was how quickly they came back. A couple of rehearsals and we had them.'
(Edge)
Comments
1
You must be a logged-in member to add comments.
SIGN IN / SIGN UP
Kelu2
19 June, 2016
Best Concert
I've been to a lot of concerts over the years and think this was the best tour. Perfect in every way and best performance. So much energy!
Newer comments    1 - 1 of 1    Older comments
©2022 U2.  Powered by Live Nation Entertainment.