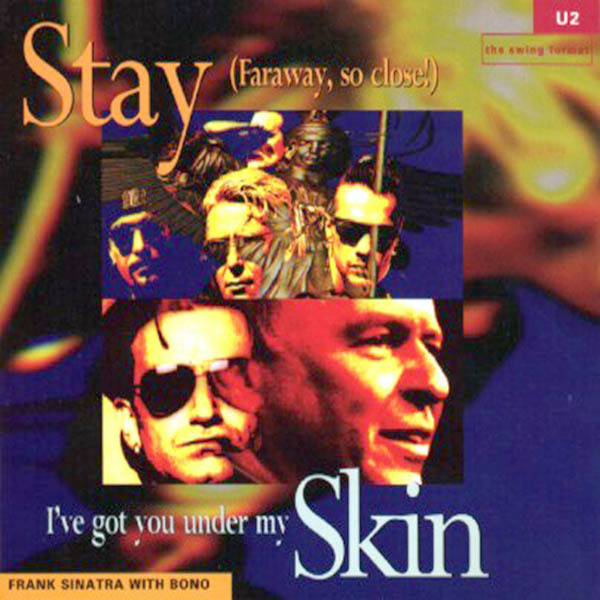 share
The single appeared on the album Zooropa. Two different CD singles were issued: The Swing Format featured Lemon remixes by David Morales and Oakenfold & Osborne. The Live Format featured Slow Dancing and live versions of Love Is Blindness and Bullet The Blue Sky as b-sides.

The song was premiered live on July 31, 1993 in Stockholm. During the August 21, 1983 show in Wembley Stadium, Bono introduced the song by saying 'this is a song Wim Wenders stole from The Beatles, we're stealing it back.' A different mix of Stay can be found on the soundtrack to Faraway, So Close, a movie by Wim Wenders. The extended mix on the soundtrack contained extra ad-libs and a few extra lines, plus a remixed instrumental track.

The song was nominated for a Golden Globe Award as Best Original Song for Motion Picture. The Underdog Mix of the single can be found on a cassette entitled Exclusive Select given away free with Select magazine in the UK in 1995. Smashing Pumpkins performed the song at a web cast event from Shoreline Amphitheater in 1999.

The song peaked at No. 4 on the UK singles chart.

Released Date:
22 November, 1993
Produced By:
Flood, Brian Eno, The Edge, and Phil Ramone
Engineer:
Flood and Robbie Adams
Label:
Island Records
Recorded At:
Comments
2
You must be a logged-in member to add comments.
SIGN IN / SIGN UP
pain_18_
17 November, 2014
1983?
Wow...U2 were extremely ahead of their times....this goes to show you how the public just doesn't get it...This explains it why they waited until 1993 to release it....I wonder why Sinatra turned it down...
RBN
10 September, 2012
There's a mistake in this page
"During the August 21, 1983 show in Wembley Stadium, Bono introduced the song by saying 'this is a song Wim Wenders stole from The Beatles, we're stealing it back.'" Are you sure it was 1983? ;-) This line can also be heard in the ZooTV DVD from Sydney.
Newer comments    1 - 2 of 2    Older comments
©2022 U2.  Powered by Live Nation Entertainment.