Hold Me Thrill Me Kiss Me Kill Me 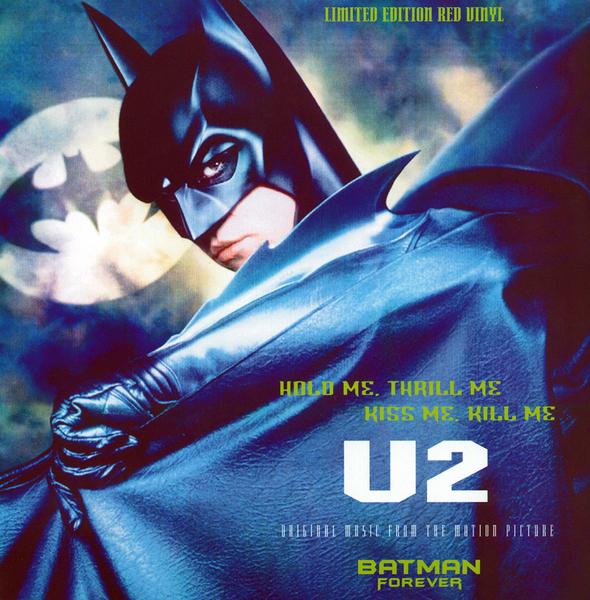 share
'You don't know how you got here
You just know you want out
Believing in yourself almost as much as you doubt
You're a big smash
You wear it like a rash
Star....'

This 1995 single, from the soundtrack to the Batman Forever movie, was a track the band started writing during the Zooropa sessions in 1993.

Bono described the song, which went to No. 2 in the UK and No.1 in Ireland and Australia, as about 'being in a rock band'. It was nominated for a Golden Globe Award for 'Best Original Song.'

The track became an ever-present during the encore of the PopMart Tour in 1997 and a live version from the show in Mexico in 1997 was released on the limited-edition CD, Hasta La Vista Baby, produced for Propaganda subscribers.

The video for the single, directed by Kevin Godley and Maurice Linnane, featured the band as cartoon characters performing in Gotham City, with Bono battling between two of his onstage personas - The Fly and MacPhisto.

Production Notes
"Hold Me, Thrill Me, Kiss Me, Kill Me" was the lead track off the Original Soundtrack 'Batman Forever' which also included Seal's "Kiss From A Rose" and contributions from PJ Harvey, The Offspring, Mazzy Star, Massive Attack and Eddi Reader. In 1996, "Hold Me, Thrill Me..." was nominated for two Grammy Award's, 'Best Rock Performance by a Duo or Group and Best Rock Song.

"The post-ZOO TV U2 seem like the perfect musical amabassadors for Hollywood's third installment of the Batman saga, BATMAN FOREVER. Just like Bruce Wayne, they are so constantly play-acting (is he Bono or is he The Fly?) that "reality" seems to veer with perspective; and just like original director Tim Burton's Gotham City, U2 now exists in a vacuum driven by old vices and new technologies. So, "Hold me, Thrill Me, Kiss Me, Kill Me," the band's T-Rex meets SoulIISoul contribution to the album, holds up equally well as a U2 track and as the film's theme, exploring the dualities of superficial contentment and inner turmoil."

Comments
2
You must be a logged-in member to add comments.
SIGN IN / SIGN UP
avpu2king28
22 May, 2020
Any Demos or Other Remixes Of This Song?
Hello There any different versions of this song. Any Demos? I Wish The Band would Allow a release of Hold Me, Thrill Me, Kiss Me, Kill Me , Demos or other Remixes. Maybe a digital Single? Thanks for looking at my comments. I Hope U2 Will Allow The Demos and other Remixes To be released.
vertigo40
08 September, 2012
Rock N’ Roll Star
“Hold Me, Thrill Me, Kiss Me, Kill Me” is one of U2’s (particularly Bono’s) most self reflecting songs. I feel the song is about becoming a rock star and the pitfalls that are associated with it if one is not careful. The song has a very hypnotic quality to it and is the song that first introduced me to U2. I have always been a Batman fan and the song was featured on the soundtrack to “Batman Forever.” The accompany video for the song sees U2 traveling to Gotham City where “Thy Fly” and “MacPhisto” from Zoo TV cross paths. The video also gives us a glimpse at the inspiration for Zoo TV’s colorful characters as “The Screwtape Letters” by C.S. Lewis is read by Bono. Looking back, I really did not understand what the song was about when it came out as I was very young but I just knew I was seeing and hearing a great band in a Batman movie. This song will always be special since it was the song that started my discovery of U2. I was ecstatic when U2 brought the song back for the 360 tour. The song has such power behind it with Adam and Larry driving the grove.
Newer comments    1 - 2 of 2    Older comments
©2022 U2.  Powered by Live Nation Entertainment.