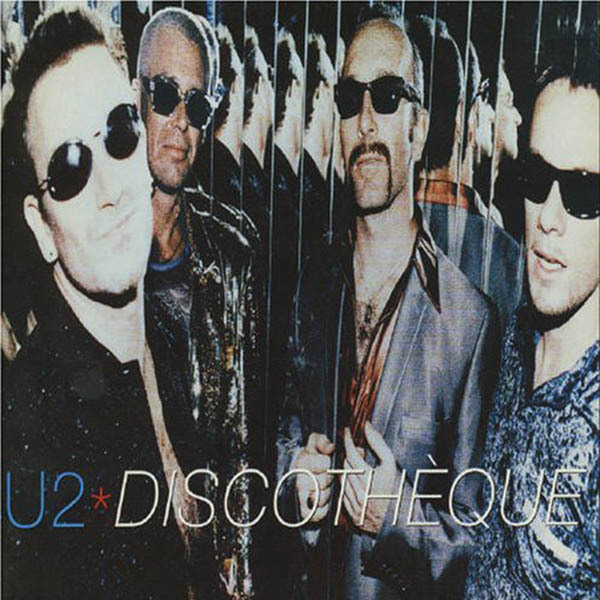 share
'You can reach, but you can't grab it.
You can't hold it, control it
You can't bag it.

You can push, but you can't direct it
Circulate, regulate, oh no
You cannot connect it - love....'

The first single from 1997's album Pop, 'Discotheque' went to No.1 in several countries and was performed live for the first time during the PopMart tour opener in Las Vegas on April 25, 1997.

In October 1996 a 30-second snippet of the track, taken from a promotional release, made it onto the web, with the entire MP3 circulating within a couple of months. This brought forward the release of the single, which itself heralded the dance-music vibe of the album where the band were 'trying to make an ode to club culture without using the tools of dance music' as Bono later put it.

The video for the single, with the band performing as members of The Village People, took some fans by surprise. 'I like to think we were dangerously ahead of our time,' reflects Edge. 'It is a great video and has been copied many times since.'

During the PopMart tour Discotheque was performed as the first song in U2's encore after their descent from the lemon. Dream Theatre had performed Discotheque live in concert where the singer mumbled most of the lyrics. The following artists recorded a version of Discotheque including Intra-Venus on We Will Follow: A Tribute To U2; Studio 99 on The Best of U2-A Tribute; and The Celebrity All-Star Jam on Hot Dance Hits 97.

The song debuted at No. 3 on the Billboard Modern Rock chart and was certified Gold by the RIAA on April 7, 1997
Released Date:
03 February, 1997
Produced By:
Flood, Howie B, Steve Osbourne
Engineer:
Mark 'Spike' Stent
Label:
Island Records
Recorded At:
Hanover, Windmill Lane, and The Works, Dublin. South Beach Studios, Miami.

'Pop opens with 'Discotheque'. We wanted a setting for the album. 'Discotheque' is a riddle about love. once you know that, it changes the way you hear the song. ' 'You can reach, but you can't grab it/ You can't hold it, control it / You can't bag it.' One of my definitions of art is the discovery of beauty in unexpected places. Looking for the baby Jesus under the trash as I sang in 'Mofo'. This was really the theme of Pop: big subjects for the basement. But it is not enough to have a good lyric or a great idea. If the tune or the musical location aren't right then you might as well be standing on a soap box at Speakers Corner.'

Comments
1
You must be a logged-in member to add comments.
SIGN IN / SIGN UP
vertigo40
07 September, 2012
U2’s Sonic BOOM (cha)
“Discotheque” is a hard hitting tune disguised as a dance pop song. As the lead single and first song for “POP”; “Discotheque” lets listeners know that U2 are pushing the boundaries of what a "rock band" is supposed to be. One of the best aspects of U2, and their key to longevity, is their willingness to experiment and explore new sounds. “Discotheque” is a great song that lyrically delves deeper; much more than the title suggests. “Holy Joe” is the b-side on the single and is worthy of being on the “POP” album. The beginning lyric; “I am a humble guy, No really I try, You know it’s hard sometimes,” really illustrates the cleverness of the lyrics. Both “Discotheque” and “Holy Joe” are significant U2 songs that need a “little heavy rotation.”
Newer comments    1 - 1 of 1    Older comments
©2022 U2.  Powered by Live Nation Entertainment.