A Night At The Roxy 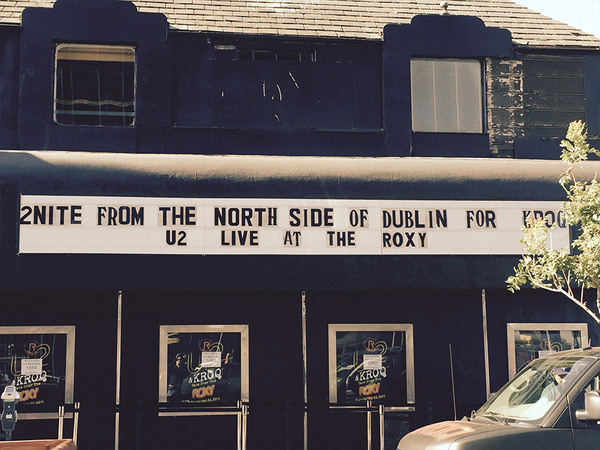 After two nights of a five night stand at the Forum, the band went back in time last night, returning to their club roots to play the 500 capacity Roxy, their first show in such an intimate L.A. area venue in decades.

If the U2ie Tour  has been reinventing the arena show as an intimate tour de force, this scrappy, charged club gig for a few hundred lucky KROQ contest winners packed a stadium's worth of energy - from crowd and band alike - into a club the size of the first L.A. venue the band ever played.

Like that show, way back in 1981, the setlist at The Roxy shared five songs with  the U.S. Boy Tour setlist.

The show opened with The Ocean as the band did so often back in those days, likewise careening into a furious 11 O'Clock Tick Tock reappearing for the first time since 2001.

I Will Follow conjured the magic of the days when the
band first heard the news that the song was in heavy rotation on KROQ
before it made a dent in the charts in their own hometown.

The Electric Co. segued into Beautiful Day, which Bono sang while embracing a young fan, ending with customary refrain of I Remember You by the Ramones - in the venue where the Ramones live set from 'Rock'n'Roll High School' was filmed.

Elevation was played live for the first time since the close of the 360 tour in 2011 and while Bono suggested he wasn't certain if the band could remember how to play the next track, they didn't let us down with a beautiful, singalong Stuck In A Moment (That You Can't Get Out Of).

'Can't believe the news today...' A fired up classic original version of Sunday Bloody Sunday was dedicated to Dennis Sheehan who 'had the dignity that our music aspires to' before Out of Control, taking us all the way back to 1981 again, closed the main set.

First time around in clubs like this, 11 O'Clock Tick Tock and I  Will Follow would have been played again but there's a few more songs in the repertoire now. Vertigo opened up the encore, with Bono falling backward into the arms of fans at the front of the stage - 'that was worth coming for' - while Song For Someone went out to two special fans in the house tonight, 'Two beautiful strands of DNA... almost as beautiful as their mother.'

This is how Rolling Stone describe the close of the show.

'At night's end (Bono) spoke of U2's first trip to Los Angeles and a visit to Zuma Beach in search of Brian Wilson's house. He noted there was a Beach Boys album at U2's first rehearsal in 1976. "We heard he had a piano in a sand pit and we just thought this man had the music of the spheres," Bono said as the band eased into Songs of Innocence's celebratory "California (There Is No End to Love)." They added a bit of the Beach Boys' "God Only Knows" and closed a short but potent set with a forceful, mystical sound of their own.'

A magical night. We'll have more reports on the show coming up from some of the U2.com competition winners who were lucky enough to see it...