All That You Can’t Leave Behind Turns 20 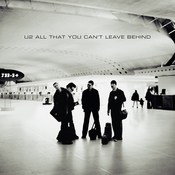 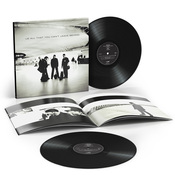 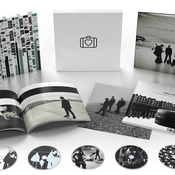 All That You Can't Leave Behind Turns 20 - ORDER HERE

Island Records and UMC have announced the 20th Anniversary reissue of All That You Can't Leave Behind.

This multi-format anniversary edition release, featuring a brand new 12-track remaster of the record and a 51-track Super Deluxe box set, will be released on the actual date of the 20th anniversary, 30th October 2020.

An acoustic version of 'Stuck In A Moment You Can't Get Out Of' is released on the same day, with the brand new lyric video out today.

The eleven tracks on All That You Can't Leave Behind, the band's tenth studio album, included the hit singles 'Beautiful Day', 'Stuck In A Moment You Can't Get Out Of', 'Elevation' and 'Walk On'.

Produced by Daniel Lanois and Brian Eno and recorded in Dublin and France, it  went to Number 1 in 32 countries and won 7 Grammy Awards, including Best Rock Album. It's the only album in history to have multiple tracks win the award for Record Of The Year  -'Beautiful Day' in 2001 and 'Walk On' in 2002.

The new remaster of the album is available as a 12-track version and includes an additional track 'The Ground Beneath Her Feet' in all formats.

-  a 32-page hardback book from longtime friend and collaborator Anton Corbijn featuring many previously unseen images of the band along with hand-written notes by Anton, plus a double-sided poster.

-  out-takes from the album sessions ('Levitate', 'Love You Like Mad', 'Flower Child'), as well as the track 'Stateless' which featured on The Million Dollar Hotel soundtrack; plus an acoustic version of 'Stuck In A Moment You Can't Get Out Of'.

-  the complete 19-track live audio of the band's Elevation Tour performance, recorded at the Fleet Center, Boston, Massachusetts in June 2001. The set includes 7 tracks from All That You Can't Leave Behind.

All That You Can't Leave Behind on Standard, Deluxe and Super Deluxe in CD, Vinyl and Digital versions is out 30th October.

Tracklistings and all format information on our MUSIC pages, and ATYCLB merchandise in the shop.

Everyone talking about it in Zootopia.

Comments
42
You must be a logged-in member to add comments.
SIGN IN / SIGN UP
Matt_u2
11 September, 2020
Excited for this!
Love that the Boston show is included. I was at that show. My ex-wife was pregnant with our first son when we went. Bono ran out into the audience during "The Fly" and came right by where we were. He slapped my ex's hand as he ran by. Fast forward to now and my son is a huge U2 fan. Coincidence? I think not!
gero27
11 September, 2020
All That You Can't Leave Behind 20 Anniv
I can't believe that 20 years ago this amazing album by U2 was released. I just pre-ordered mine. It would be awesome if they included more unreleased songs from that time in this box set; but I will still get it no matter what. "Kite" is one of my favorite songs along with of course Beautiful Day what an anthem, it takes me to a comfort zone instantly. "Walk on" is also another song that helped me battle depression a couple of years ago, unbelievable. The album in it's entirety is amazing.
Chrischi69
11 September, 2020
I want to go back!
Okay, this October will see the twentieth anniversary of U2's fabulous album "All that you can't leave behind"... Now I am feeling old...
antoniografov
10 September, 2020
Legendary time of the legendary album!
This album really influenced me. From the first song, it energizes! It's a Beautiful day... I hummed every day. Looking forward to the anniversary edition! A great thing for a fan!
danverslunatic
10 September, 2020
Take it all!!!
Me: i have spent WAAAY too much money on records this year... Me: (5 minutes later) YES!!! Take all my money!!!
kilowattson
10 September, 2020
Grower not a Shower
I love this album, but I didn't necessarily at first. I mean it was ok, but yeah after Pop I was expecting some along those lines. Full transparency, I believe Pop is one of their best albums ever (if not "the" best for me). But that was when I was in my early 20s. Now I'm in my early 40s and the album is just magical. As I get older, have kids, start to settle down and come out of my equivalent of the Berlin years, this album finally resonates with me like - I suspect - it did when they wrote it. It's always been good, but now it's got a beautiful tone I finally understand.
MichaelHarris
10 September, 2020
Mick Harris 1966
Wow 20 years, cannot believe it where has the time gone. One of my favorite tracks is When i look at the world on this one. looking forward to getting it again.
OB
10 September, 2020
Love the idea but expected more for the
The box set looks amazing in terms of design and packaging but, I wish more unreleased tracks and different live performances were included. It seems most of the content is just repackaged. That's too bad. U2 has tons of unreleased material sitting on their vaults collecting dust, release it to fans!
clarky46
10 September, 2020
I’ll leave this behind
£200 for 9 tracks that have not been available is a bit to much. What happened to all the demos that have been recorded at the album sessions that didn’t make the cut I would pay £200 for them.
robertojennifer
10 September, 2020
Perfect
Amazing really beautiful
baseballmansas
10 September, 2020
Disappointed Fall 2001 Show Wasn't Inclu
While I'm excited that U2 is celebrating this excellent album, I'm disappointed that a different concert from the second leg of the US Elevation Tour wasn't used. U2's played some of their best shows ever during the fall leg of this tour, especially the final night at MSG when they played Out of Control with NYPD and NYFD members on stage as a surprise impromptu finale. U2 gave our country a sense of comfort and healing after 9/11 and recycling an already released concert is a bit of a disservice to this anniversary, the fans, and the incredible spirit of those fall concerts which made an indelible mark on my life and I'm sure many others.
Reggie Thee Dog
10 September, 2020
Looking Forward To This!
Ah, it is a Beautiful Day as we finally get into the 2000's! Looking forward to this box set, because this album restored my faith in Rock and the ability of U2 to reach the masses. I understand some fans see this as a 'regression' after the daring sounds of Pop, but I see it as a spiritual and musical awakening, moving back towards what made U2, well U2 and still mixing in the technology of its time. My favorites include Beautiful Day, Elevation, When I Look at the World, and, of course Kite.
Newer comments    31 - 42 of 42    Older comments

Reissued Albums, All That You Can't Leave Behind
©2021 U2.  Powered by Live Nation Entertainment.