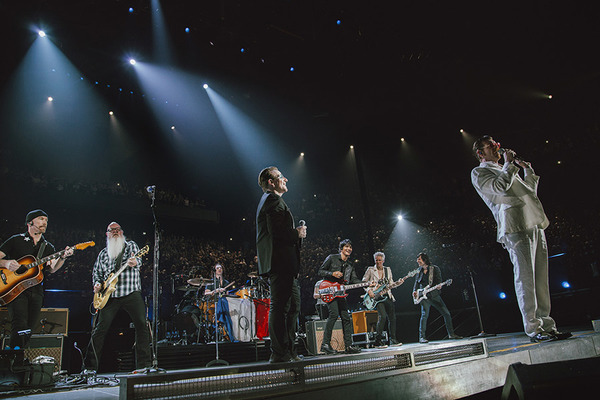 'We want to introduce some people whose lives will forever be part of this city…’ explained Bono. 'These are our brothers, our fellow troubadours they were robbed of their stage three weeks ago. We would like to offer them ours tonight. Welcome The Eagles of Death Metal.'

Eagles of Death Metal were the surprise guests at the end of tonight’s final show in Paris.

Three weeks after the deadly attacks at their show at Le Bataclan, the band were back on stage in Paris, receiving an ovation to raise the roof, they joined U2 to perform Patti Smith’s The People Have The Power. They then stayed on stage to perform a track of their own, 'I Love You All The Time.'

Tonight's show was one of the two rescheduled from U2's visit to Paris last month and the seventy sixth and final show of the iNNOCENCE & eXPERIENCE Tour (seventy seven if you include the club night at the Roxy in LA ) which opened in Vancouver back in May.

Another highlight tonight came when the band played the e stage, where all tour long different fans have joined them on stage for Mysterious Ways. Following a competition on U2.com, tonight nine of those fans, from different cities in North America and Europe, had flown in to Paris to be at the show.

One of them, Trish, found herself up on stage again, grooving gracefully through Mysterious Ways and then shooting the Meerkat moment... at which point all the stage-divers were up with the band and rocking the joint through Elevation. 'What a collection you are,' said Bono 'Thank you all.'

And what a great way to mark the close of the 2015 shows, the Fourth Wall well and truly down again.

Those fine people at @U2gigs captured the set list stats. 'Paris is the only city of the entire tour at which Elevation has been played every show. The same thing can be said about One, which was played in the encore; it has appeared at all four Paris shows, but missed at least one show in every other city.
The encore will be remembered for a long time. It included fan favourite Bad, performed for the fifth show in a row - a streak last achieved when it was played at the six final shows of the Elevation Tour's third leg in November/December 2001.'

And here's a few highlights from some of the media coverage of the night.

'This was a beautiful evening of great music, but it was also about the very serious things happening in France and in other countries,' said Cécile Audibert, 35, who said friends of her cousin had been at a restaurant attacked on November 13.

'It's a rock 'n' roll show!” Bono shouted not long into U2's concert Monday night in Paris, but of course he knew it was more than that...'

Billboard quoted Promoter Arthur Fogel, on how U2 always ‘rise to the occasion': 'U2, a band seemingly built for big emotional moments, rose to the occasion in Paris, last night bringing Eagles Of Death Metal to the stage in dramatic fashion. Fogel, promoter/producer of all of the band's tours since PopMart in 1997-'98, calls U2 'a special band, special people, and they do rise to the occasion. They have an incredible ability to capture the moment, the mood, and it's pretty inspirational, I have to say.'

The New York Post noted the return to the stage of Jesse Hughes.  'The unbowed Hughes' excitedly strutted down the runway at the centre of the venue, draping himself in a French flag, and bathing in the pulsating Parisian energy. The road back to any semblance of normality will be hard for the Eagles of Death Metal, but the 16,000 in the arena gave them an almighty first push...'

Fans at the show found the final night both inspirational and moving.

'That @EODMofficial have returned to the stage so soon,' tweeted @simonpeyda ‘In #Paris nonetheless, is a victory for music and for the world. #Courage #U2ieTour'

‘I think we just saw @U2 rewrite the whole live concert experience again.' added @_Bigwave_  'Passing the torch over to @EODMofficial to end the #U2ieTour Wow.'

‘I'm happy and sad at the same time.' tweeted @webgrumpy 'I have Tears in my Face and Tears in my Heart! But everything has an end! #U2 #U2ieTour #U2ForParis'

We’ll have more on tonight’s show coming up but if you were in the house tell us what it was like and post your photos here.