To mark this month's 30th anniversary of Achtung Baby, the band have collaborated with Berlin-based French artist Thierry Noir - the first artist to paint on the Berlin Wall - for a special one-off installation at the legendary Hansa Studios in Kreuzberg.

In 1991 U2 commissioned Noir to paint a series of now iconic Trabant cars, which featured on the album artwork, as well as on 1991's Zoo TV Tour.

U2 x THIERRY NOIR sees Noir return with a newly painted Trabant for 2021, and an exclusive mural painted on a section of the Berlin wall.

If you can get to Berlin later this month, then from November 19th to the 26th, you can book a 30 min time slot free of charge to visit the installation at Hansa Studios between the hours of 12:00 and 20:00.

Everything you need to know on this dedicated microsite.

The bonnet of a Trabant will be auctioned at Phillips, London on 9th December  as part of their New Now sale with proceeds going to Berlin Institute for Sound and Music.

Comments
6
You must be a logged-in member to add comments.
SIGN IN / SIGN UP
petrajohnk
26 November, 2021
it's art
I didn't know what to expect and that was a good thing. In all the excitement about reading to visit the Hansa Studios, I missed the part that this was actually about seeing the art exhibits in the entrance hall of the building. For somebody living in the city it was surely an occasion to jump there and have a look, for somebody taking a day off and traveling hundreds of kilometers it was a long look a Thierry Noir's Trabant. But look, I enjoyed it, enjoyed seeing other peoples faces with the same question marks written in their eyes, really enjoyed and watched twice the video about the production of "One" and the best part of it, in all those hours driving I listened "Achtung Baby" up and down in the car, like the very day when I bought my record 30 years ago. Art is a good thing - takes your thoughts away , specially in these days. 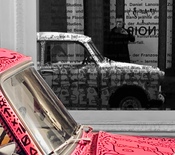 StinkyJay
18 November, 2021
Thank You for This (and making it Vax re
Achtung Baby was the most consequential piece of art for me in my life time. It's fate that I am living in The Netherlands and am making the trip on Monday. I cannot believe I will be able to soak in Hansa and on this very special occasion. This record profoundly changed my life in so many ways. Just as Joey did for Bono, four guys from the north side of Dublin did for me. And a HUGE thank you for making it only for the vaccinated or recovered. It shows once again you care about everyone, especially those who cannot (or will not) care for themselves. Thank you, thank you, thank you! Monday cannot get here fast enough!
alebiou2
17 November, 2021
I can not go
I'm from Brazil, experiencing a crisis, and there's no way I can go to Berlin. U2 one day, I should record an album here in Brazil, we have beautiful beaches!
alexisaurus
16 November, 2021
Fitting Addition
I was quite excited to see the Trabants displayed hanging in the foyer of the Rock and Roll Hall of Fame when I visited some years ago. Photography is not permitted in the actual exhibits, so it was nice to have something to be able to snap pics of and get all flustered super fan over. This new addition in Berlin looks to be keeping quite well with the style and feel and (in my opinion) adorableness of its predecessors. Thumbs up.
cantona
15 November, 2021
Trabant Resurrection
Inflatable trabants ready to rock and roll. Achtung Baby!