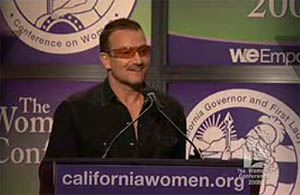 Introducing himself as a salesman, to a rousing reception including more than a few wolf whistles, Bono told the assembled women he was there to sell One and (RED). He went on to explain the work the One campaign is doing towards justice and equality, before describing RED as the "consumer wing of our movement".

Bono urged the American audience to maintain the fight against AIDS and poverty in the face of economic hardship. "Clearly these are momentous times in America... times of crisis, times of chaos. Capitalism is on trial... The US, the world, is changing shape in unsettling ways. But this is exactly the right time to think about the world. Even to change it" he said.

He asked attendees to sign up to One's Petition calling on John McCain and Barack Obama to keep their commitments to the poorest in the world should they enter the White House. You can sign up for the petition here

Watch the highlight's of Bono's speech below and to see all the coverage visit ONE here".