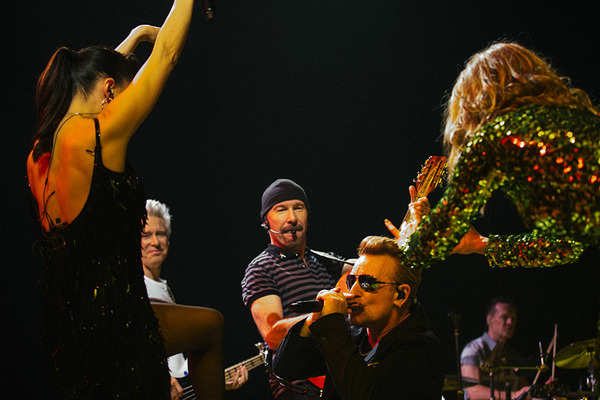 'The first manager of the group U2, Adam Clayton on the bass
The first employer of the group, on the drums, Larry Mullen Jr.
On guitars with a direct link to NASA, the rocket scientist of this band - The Edge…'

Bono, introducing the rest of the band during Electric Co., and what an electric company this band were, as we finished up in bubblin' Dublin.

Donal Scannell, who reported on the opening night in Dublin for us, was there again for us on the final night. Here's his take.

Saturday night felt way different from show one last Monday before a note was sung. Party night for a start. Buzzing people with no work to get up for the next day. This show was the iNNOCENCE and eXPERIENCE denouement. The original end of tour party scheduled for Dublin.

U2 were as relaxed as you could be after a week at home. The gig was full of impromptu asides and sheer celebration. At one point the e stage heaved with Queens. Dr. Panti Bliss, a newly elevated civil rights grandee who galvanised Ireland through a long campaign for marriage equality, was the star of 'Mysterious Ways'.

Despite a year of incredible success and full houses from Sydney to NYC, Panti was feasting on the thrill of her biggest stage yet. She was augmented on stage by a fiery Imelda May as 'Desire' crackled onto Meerkat. That dynamic duo plus U2 made the best selfie ever.

Tonight was a night of thanksgiving. Bono heaped praise on the crew who made the show happen.

"Jake Berry who fit all of this into what we still call The Point Depot. Without him we wouldn't be here in Dublin."

Willie Williams, Smasher, Joe O'Herlihy and Gavin Friday were also amongst the many name-checked. Making us all aware that shows like this only come because of a team built over a long time.

What you quickly get used to at a U2 show is actually quite radical. How they come and go. How they move around. Or the piano that appears from under the stage for Bono and Edge's acoustic versions of 'Angel Of Harlem' and 'Every Breaking Wave'. This piano pops up through the e stage in a deft movement that takes seconds.

How much thought, effort and action by how many people went into that mostly un-noticed iNNOCENCE AND eXPERIENCE moment? Multiple that by a thousand to appreciate the efforts involved to put this whole show on.

U2 have developed what they started with 'The Claw' on the 360 tour. There is no set stage. There is no 'Us' and 'Them'. U2 coax us into looking not at them but at each other.

U2 live in an audacious Eirtopia of their own creation. A version of Ireland that's better.  Better because it's free from begrudgery and is full of love and ambition to be the greatest.

Every time a U2 tour comes and goes I feel the same way. Exhilarated, inspired and determined to apply what I felt at their gigs to my daily existence.

As iNNOCENCE and eXPERIENCE sets sail to Paris I resolve to do more to help refugees. This resolve comes not just from U2, but from Stephen Hawking, who provides one of this tour's unforgettable moments every night.

This sage advice precedes the #refugeeswelcome hashtag that everyone cheers so passionately.

When 'Where The Streets Have No Name' was written it was the haphazard refugee camps of Ethiopia Bono was evoking. They seem organised compared to the impromptu indignities we heap on our follow humans as this harsh winter takes hold. 'Streets' comes just after 'Bullet The Blue Sky'. They run each other as a powerful double act.

'Bullet' has been transposed from Central America to the Middle East. The geography has changed but once again it's everyday people feeling the pain. As Bono's rewritten words cajole him to do more he's asking the same of us, to "Dream of a world we want to live in."

"What do you want," he asks, "I know what I want. A place called home. I know we will not become a monster to defeat a monster because we believe in love."

Tonight's show ends with a single light beaming upwards as the audience sing Dennis Sheehan's favourite U2 song in his memory -  '40'.

Dennis, as Bono explained "Led this band for 33 years. A man from Dungarvan. We lost him this year. His family are here and we play for them. Dennis started people singing '40' when we were recording 'Under A Blood Red Sky. That's his voice on the microphone getting people to sing."

'How long to sing this song', rang out well after Edge, Adam, Larry and Bono left the stage.  A beautiful and brave way to finish another life affirming show.

I face the night determined to share my good fortune with others.

Now Paris this weekend is the re-scheduled tour climax as a gesture of defiance towards those who need love in their lives.'

Were you in the house for the closing night in Dublin? Tell us what it was like and add your photos here.

Donal Scannell first saw U2 in Croke Park in 1987. He's written about the band for many publications, including their own magazine 'Propaganda', and was heavily involved in their 'Kitchen' nightclub. You can find him on Twitter @donalscannell or via www.snowfurnace.com