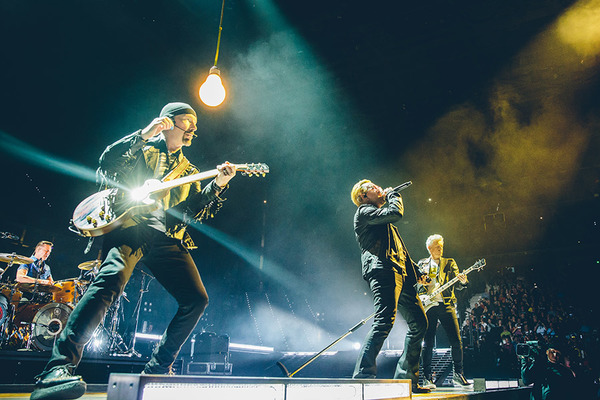 'High, higher than the sun
You shoot me from a gun
I need you to elevate me here,
At the corner of your lips
As the orbit of your hips
Eclipse, you elevate my soul...'

First of two shows at the SSE Arena in Glasgow… and it was full of memories.

Bono slipped a line of 'The Saints Are Coming' - released nine years ago to the day - into 'I Will Follow', but bbaedanski in our comments went even further back.
'Tonight some 31 years ago that i was at the Barrowlands watching the Unforgettable Fire? Oh and meeting the guys at the Holiday Inn...'

And as @markopronto confirmed on twitter to @u2history, 'my first ever U2 gigs are 31 years to the exact day of these Glasgow gigs..unbelievable 6/7/11/84'

'This feels so  close to home,' explained Bono, 'Almost home kinda feeling, thank you for sticking with us...these streets are familiar to sum they could so easily be our streets.'

And the memory of their first streets took us to 'a song that could be for Gwenda, Maureen or Jo... but tonight it's called Iris.'

The good folk at @u2gigs report this was the 72nd performance of 'Song For Someone' - not bad for a song that was only released in September last year. In contrast, the beautifully reinvented 'Zooropa',  made its live debut in this city way back in 1993 at Celtic Park - and was played live for only the 60th time tonight.
'Bullet, Zooropa, Streets,' as @PascalGteD tweeted, 'The ultimate trilogy this tour...'

Another memorable night on #U2ieTour, couldn't put it better than niknoks06 down in our comments:
'GLASGOW.....Fantastic....Brillant....Amazing....Loved it!'

First of the press reviews is from the Daily Herald who called it an 'unforgettable show'.

Were you in the house for the opening night in Glasgow?  Tell us what it was like and add your photos here.