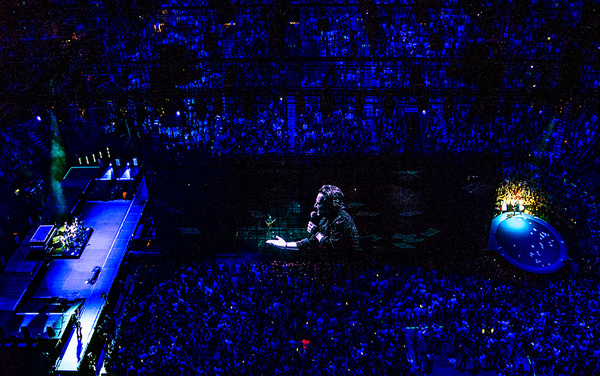 FIRST NIGHT IN CANADA
Getting ready to leave the ground in Montreal.

When & Where
Tuesday June 5th 2018, First night of two at the Bell Centre, Montreal, Canada. Show 14 and second half of first leg of U2eiTour underway. Breathe in…

Set List
Three shows in a row now for Gloria in fifth spot & stunning new graphics from Broken Fingaz were on screen for a blistering performance of ‘American Soul'. Here is the full set list.

On The Socials
@pat_wand @U2 live in Montréal #U2eiTour So damn good. Merci beaucoup!
@maxtsukino still in my little cloud of happiness... =) Montreal, you are a great and noisy audience... thanks from the whole of my heart…

In The Press
Ian Mcgillis for Montreal Gazette :
The first night of U2's eXPERIENCE & iNNOCENCE tour dates in Montreal largely succeeded in combining the band's tried-and-true hits with some of its newer songs. Intimacy is a word whose meaning alters when you're talking about U2. Remember, this is a band for which scaling down means forgoing 60,000-seat stadiums in favour of mere 20,000-plus seat arenas. We're hardly talking back to the clubs here, folks. Precisely, in the case of the Tuesday night's first of U2's two Montreal shows at the Bell Centre as part of their eXPERIENCE & iNNOCENCE tour, it meant the paradoxical spectacle of enormous production resources being deployed in the service of making 21,000 people feel as close to four musicians as reasonably possible...
Entering the arena last night, attendees were greeted by the sight of a huge translucent video screen/cage running most of the length of the floor, with the main stage at one end and smaller, circular ‘B' stage at the other. Inside the screen, an elevated catwalk connected the two stages. At any given time complementary images might be projected on the screen, and members of the band might be on the same stage, on different stages at the same time, or at various points between.
As for the music itself, 42 years into their life as a band U2 find themselves in a rare position. They could easily fill a three-hour setlist with guaranteed show-stoppers, but it just may be that they've asked themselves how many times a show needs to be stopped. What they're really looking to do now is tell a bigger story, one that goes right up to the present day, folding their Dublin beginnings into their standing as a rock institution. In practice, that means omitting some of the songs that got them into those stadiums in the first place and foregrounding the companion-piece works Songs of Innocence and Songs of Experience. The band has to know, going in, that nothing on either of their two most recent albums is going to instantly galvanize a big room in the way at least two dozen older songs at their disposal always have and always will, but they are admirably placing faith in their new songs and in their audience's willingness to get to know them...
Opening the show with the trifecta of Love Is All We Have Left, The Blackout, and Lights of Home before the reassuringly familiar I Will Follow was a statement in itself, while Love Is Bigger Than Anything In Its Way has the potential to join the top echelon of U2 ballads as a surefire, goose-bump-raising, lighters-in-the-air experience. Hopefully they will stick with the song long enough for it to take on that weight.
A catalogue as extensive as U2's provides ample scope for a surprise deep dive or two, and U2 obliged: Gloria, the greatest hit that never was, from the spotty sophomore album October; Until the End of the World and Acrobat, hardly obvious choices from the hit-packed Achtung Baby; and Staring at the Sun, a neglected gem from the much-maligned Pop, performed stripped down on the smaller stage with Bono accompanied only by The Edge on acoustic guitar. This reviewer would have liked to hear Miss Sarajevo, a highlight of the 360 Tour, when Bono bravely handled the operatic Pavarotti part himself. But you can't have everything. Bono, who once chided himself in song for figuratively trying to throw his arms around the world, has clearly made peace with his gifts as a social justice advocate on the grand scale: lauding Justin Trudeau and Canada in general for “providing the world a light in a very dark time,” donning his alter-ego Macphisto mask to skewer Trumpism and giving prominent space to a film of Ivor Cutler's Women of the World Take Over, a song on behalf of ONE, an organization devoted to raising awareness of women's issues. Just as things might have got too warm and fuzzy, though, U2 followed with Bono's deeply conflicted love ballad One. Still their greatest song, it was picked up so smoothly and spontaneously as a singalong that Bono could easily have handed the whole vocal over to the crowd, national anthem style. It was a reminder that large-scale concerts at their best are about collective cathartic moments, and that nobody can provide those moments quite like U2…

Experience(s) Of The Day
Sticks and Picks… a home made sign that read ‘Hey Adam pick ME! won Emily (@Shaaakeitsalome on twitter) (https://twitter.com/Shaaakeitsalome/status/1004187369610727424) an Adam Clayton pick, carefully handed across to her by the man himself from his podium just after Pride. She tweeted out afterwards: ‘I get so many things I don't deserve. Like this. I'm speechless. Thank you, Adam!'
And Kim & Michelle were spotted by Larry down by the e-stage in their Larry Mullen Band t's, and he made 2 fans very happy indeed by carefully handing over a drumstick each : https://twitter.com/kimmyc73/status/1004203612644528128
(By pure coincidence Emily, Kim & Michelle bumped into each other after the show and swapped swag stories late into the night…) : https://twitter.com/U2Community/status/1004269230559318016

What did Bono Say?
"I would like to take this moment to talk about Canada ... a country, and it's not an overstatement to say this, that it is a light for the whole world to look into... these are dark days for democracy and Canada is a light."

Shoutout to friends from Arcade Fire who were in the house tonight.

Review On U2.com / Zootopia
bigwave (who helps look after Zootopia and other odd jobs around the place…) : http://zootopia.u2.com/forums/topic/39394-montreal-live-thread-u2eitour/?do=findComment&comment=1147731
First time for eXPERIENCE shows for me in Montreal. SO much to absorb it's hard to process just yet. It was a punk rock and roll extravaganza theatrical blockbuster chest busting bass and drum ball kicking feast of brilliance. Thats for kickoff. Deserves to be broken down song by song, moment by moment, re-savoured through photos taken and opinions and feelings shared here in town with other fans. Over beer. More to come...

If you were at the show, add your own photos and reviews here.