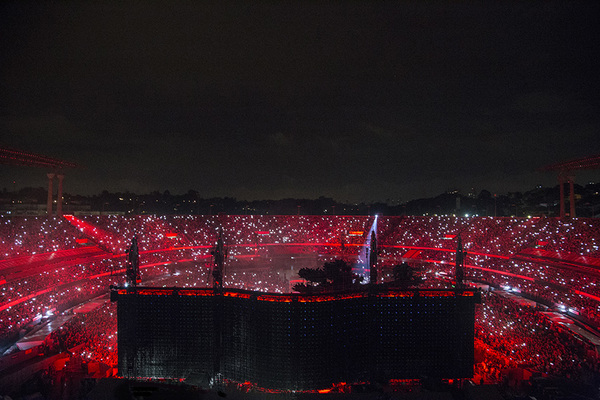 Set List
'If it has to end, it should end in … BRASIL!'
More than a quarter million fans came to see U2 during their record-setting four-night stand in Morumbi and the final show did not disappoint. The closing night of #U2TheJoshuaTree2017 Tour was an emotional and sonic humdinger! One of the highlights was when Daniel Lanois, who co-produced the 1987 album with Brian Eno, joined the band onstage to sing the final verses of 'Mothers of the Disappeared'. The set also included what had become the standing invocation—Sunday Bloody Sunday, New Year's Day, Bad, and Pride (In the Name of Love)—the Joshua Tree album in sequence and in its entirety, and Act III (aka 'The Encore') with Beautiful Day, Elevation, Vertigo, You're The Best Thing About Me, Ultra Violet (Light My Way), and One. The band weren't done yet: 'One last song, where it started for all of us? Oh my God!' Bono said, as they whipped the massive São Paulo audience into a joyous frenzy one last time with 'I Will Follow.'

Here's the complete set-list from the last night in São Paulo.

@larygou: 'thanks @u2 for bring the joshua tree to brazil and give us the opportunity to see it in live! it'll always be in my heart. i simply love it.'

@mediamepham: '51 shows throughout the world and it ended tonight. Farewell #U2TheJoshuaTree2017 it was utterly incredible @U2 #SaoPaulo #Brazil'

@LeonardoRatti: 'O final com Mothers of the Disappeared é de cortar o coração. Perdão pelo flood, mas ainda tô muito encantado com o show. Por mais que o U2 tenha se consagrado com o rock de arena, cheguei à conclusão que a beleza da banda está nas faixas mais intimistas.' (English translation: 'As much as U2 has devoted itself to arena rock, I have come to the conclusion that the beauty of the band is in the most intimate tracks. The ending with Mothers of the Disappeared is heartbreaking. Sorry for the flood, but I'm still very delighted with the show.')
'Presenting Daniel Lanois, the creator of The Joshua Tree!' Bono said, as he welcomed the Canadian musician/producer to the stage to sing the final song on 'The Joshua Tree' album. 'Obrigado, Daniel Lanois!' Bono thanked Brian Eno, who co-produced TJT with Lanois (who also provided backing vocals, additional rhythm guitar and played the tambourine,and omnichord on the record) and also mentioned Steve Lillywhite , Flood, Anton Corbjin, Paul McGuinness, Anne-Louise Kelly, and several others who worked on the album 30 years ago. 'These were the co-creators,' Bono said. 'Thank you for listening.'

What else did Bono say?
'Thank you for coming out to see us. Thank you for carrying us. We felt carried,' Bono said during 'Bad'. 'This is the last night of the Joshua Tree tour. It's a big moment for us. Gigantic. But as somebody famous should have said, if it has to end, let it end in Brazil! And we'll let it go. Isn't that right Edge? Let it go….'
Before singing a snippet of 'Heroes', he recalled a recent conversation with Noel Gallagher about David Bowie, who passed away in January. 'I was talking with Noel about how much we missed David Bowie, talking about really missing him, just feeling a real hole in our hearts where David Bowie used to live and still does in so many ways…Let us remember this extraordinary artist who let us call him friend when really, we were just fans.'

'One Tree Hill' went out to the late Linkin Park singer Chester Bennington, who died in July, his six children and wife, Talinda, mentioned by name.

Introducing 'One', a special dedication: 'On the last night of the Joshua Tree tour, we would like to dedicate the next one, the next song to all the women and the men in our audience who just in their own way want to be useful to their community—to a small thing here, a big thing here. We know the sense of our audience, we know the sense of the kind of people we know you are. We've never done it before but we should. All over the world we meet U2 fans working in refugee camps … for Amnesty International… girls, boys, men, women. We're proud of you. So thank you. Look after each other. You get to carry each other.'

Review on U2.com
lufego26. 'Happiness is a state of love and trust. Thank you for the sensational show. Tears streamed from my eyes a lot of times. It was the first show with all three generations together. Father, son and granddaughter. And my dear wife Claudia. My daughter loved it and rated the show as unforgettable. Receive a hug and a lot of love from all of us. #TheJoshuaTree2017 #ONE #ONEBrasil

sandrapalheta26. 'I want to run, I want to hide…@sptours Pop Mart, Vertigo, 360, innocence + experience and the Joshua Tree now, so much love for this band....#iwanttoruniwanttohide #mylifehasasoundtrack

Were you at tonight's show in São Paulo? Tell us all about it. Add your own review and photos on our tour pages.