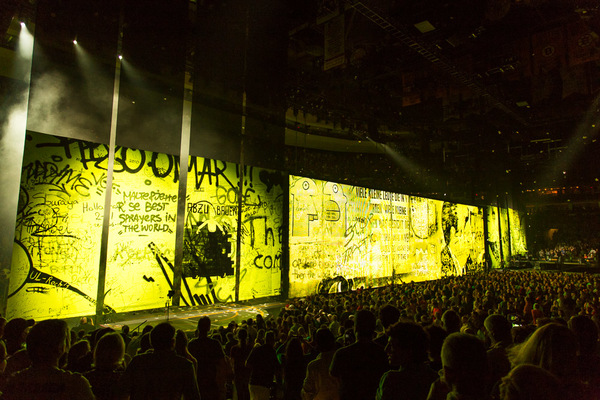 The first of U2's eight night return to Madison Square Garden started with a truly magical moment: the first performance of The Miracle of Joey Ramone in the birthplace of its inspiration and the immortal Ramones.

The Electric Co took things even higher, the crowd reaction shaking the foundation of the  Garden with an intensity of a 70's punk show. (Later a transcendent Beautiful Day segued into 'I Remember You.' dedicated to Joey Ramone and his bandmates, those 'Kings from Queens.')

'When we first played a club called The Ritz in this great city,  another century ago, we thought of ourselves as a punk band… and you know what?  In all the ways that matter, we still do'.
'Still getting into trouble for doing things different. A band of equals… with an audience of equals... an audience of betters.'

A review in Newsday lauds the power of the stage production. 'When Bono struts down the walkway between the tour's two 40-foot video screens, the effect is that he becomes part of the gorgeous artistic videos of his childhood being projected on the screens. It's a brilliant bit of staging and the band uses it for a stunning effect to showcase "Cedarwood Road," about life in the band's North Dublin neighborhood, and "Song for Someone," a love song for Bono's wife Ali, from the new album. The truly breathtaking result makes the shattering of that innocence by war -- documented in the classic "Sunday Bloody Sunday," which snaps the mood as quickly as Larry Mullen Jr.'s snare drum hits, and the new, raucous "Raised by Wolves" driven by The Edge's raging guitar riffs -- almost overwhelming. They use "Until the End of the World" to punctuate the bleakness with an exclamation point.'

If this show was cooking in the venue, it was also bubbling online and the lid came off with one completely unexpected moment on the 'e'stage.
'October. They played October. That's all you need to know.' as @Maxtksukino put it on Twitter. The first live airing of this sparse, beautiful, autumnal elegy since 1989. And adding to the sense of the spontaneous and unpredictable on this tour.

'The #U2ieTour is unlike any other U2 tour,' as @atU2 posted.'The band is embracing the risktaking & sharing in the fun w/us with breaking down the 4th wall.'

The audience are smart too, with @bethandbono tweeting, 'October is innocence, Every Breaking Wave is experience. A perfect, beautiful, sad, poignant pair.'

The reviewer in the New York Daily News was struck by how the band drop into many of their own songs,  lyrical  snippets from other acts.

'In many songs, the band threw in tidbits of songs that have pleased and shaped them over the years. They teased touchstones from Stephen Sondheim's "Send In The Clowns" to Talking Heads' "Burning Down The House" to Paul Simon's "Mother And Child Reunion" (during a spot about mother-to-child transmission of AIDS).

Such hits served as signposts of history just as surely as did pieces penned by the band's own hand. By making old and new songs bond on themes of time and perspective, this aging, embattled band found a new way to make themselves relevant, yet again.'

Pride ('See all the Irish flags here tonight...') went out to Harry Belafonte, a man who marched with Dr King ('We have such a great man in the house tonight...') and was an invitation to 'sing for the peacemakers'. One, was a tribute to the resilience of New York City  and also dedicated to Salman Rushdie. As usual, One no longer needs  a lead vocalist.

'Bono sings a line from One,' tweeted @Susan_MacD 'Then the fans sing the rest. Breathtaking. Well done #NewYork1'

As @TheGarden themselves put it. 'A night for the ages with @U2 @TheGarden and it's only just the beginning.'

There's a few of our highlights, what were yours? Were you at the show? What were your unforgettable moments? Post your own review of the opening night in New York City and add your photos here.