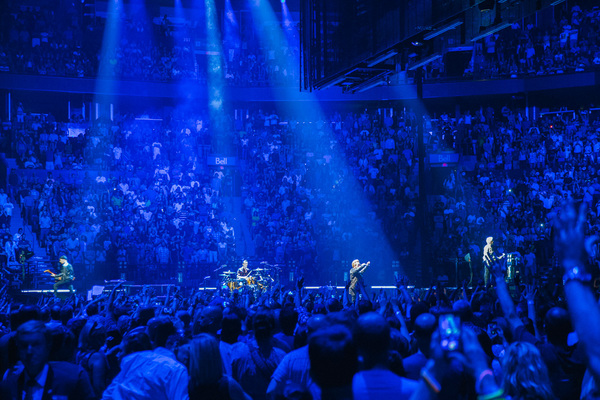 Tonight might be the last night in Montreal for the iNNOCENCE + eXPERIENCE Tour but this didn't stop the band and crowd embracing it. From the start introduced by Bono in French, 'Plus beau son i jamais entendu', 'Most beautiful sound i ever heard', the band and audience enjoyed the final night in Montreal together. Being in the city for a while the band had invited some friends they met while here from the The Noiize Group / MURAL Fest.

Tonight, Adam was wearing a Joy Division t-shirt, and there was a nod to them at end of Vertigo, with Bono singing a snippet of 'Transmission'.

The band surprised the audience with 3 songs from 'All That You Can't Leave Behind' tonight with 'Stuck In A Moment You Can't Get Out Of', 'Elevation' and 'Beautiful Day' as noted by @KevinS2U.

40 was played for the third time on the tour to close the show, dedicated to the 6 Irish students who lost their lives at Berkeley the day before.
'We send this song from this beautiful, joyful place to the hearts that are sore across the water'.
During the song, Bono picked up a searchlight, shining it into the crowd and then leaving it down pointing up on the e-stage, waiting for Larry to finish.

Farewell to 4 great nights in Montreal.

Were you at the fourth night in Montreal? What were your highlights? Post your own review and add your photos here.