Live in Berlin for the MTV EMA's

5 Nov 200935
share
At 7pm Berlin time tonight U2 took to the stage on the East Berlin side of the Brandenburg Gate for a short but stunning six-song live set, part of the at the MTV EMA's. (Apologies if you are in the UK and Ireland where unfortunately this clip is unavailable due to local programming restrictions.) More of U2 at the MTV EMA's here.

'Thanks for coming out in the cold,' said Bono as the opening bars of One broke the sharp night air. The words ONE and FREEDOM bathed the Gate, the video backdrop ending with fireworks and Bono wishing Berlin a 'Happy Birthday'. It turned out to be a memorable night, prelude to the coming celebrations of the twentieth anniversary of the Fall of the Berlin Wall.

'Thousands of Berliners and U2 fans enjoyed the 'MTV EMAs present U2 at the Brandenburg Gate' this evening.' said Mr Klaus Wowereit, Governing Mayor of Berlin. 'The Pariser Platz was the scene for a joyful celebration of peace, love, freedom and music that Berlin will never forget. Congratulations to U2 and MTV for bringing this unique moment of musical history to the City of Berlin.'

As for the set, here's our notes: From 'One' the band segued into'Magnificent' where Bono spoke of this proud city and one nation and thanked MTV for building the set. Then they ignited Sunday Bloody Sunday and with the stage swathed in green and Edge rocking out, Bono introduced the surprise guest, Jay-Z as the 'Mayor of New York City' who then rapped over the song, while Bono and Edge shared verses of the Bob Marley classic 'Get Up Stand Up'. Bono had some special lyrics for the city.

'And all the lovers and hate
That pass these keepers of the gate
And it's a heavy weight this history
But it's not too late
Won't stop this Congregation
Can't stop this Radiation
Can't stop this Meditation
And I have no Hesitation
In this ancient brand new nation
I sing but it's a shout
Jay-Z is in the house
So there's no roof over our head
Heh neither of us are goin' to bed
Berlin Berlin...'

Speaking of the wonderful friends the band have in this city, Bono invited the audience to 'feel this moment that we're in ... in this beautiful city of Berlin.' And we're into Beautiful Day with the stage brilliantly illuminated, right up up to the horses at the top of the Brandenberg Gate itself. 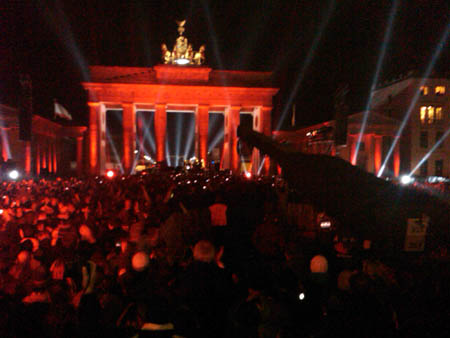 In biting cold, Vertigo was just the ticket to keep people warmed up - the crowd going all the more crazy with a customised German countdown to open the track.
Everyone swaying from left to right, Bono leans on Adam as he sings... and speaks: 'Wanna thank the Mayor and MTV and Jay-Z. A song for people who are trying to hold - just that little bit tightly'.
With that the band were into a mesmeric 'Moment of Surrender', the Branderberg Gate shining under the night sky and towering over the square with four Irish musicians underneath.

Here's what they played.

Wonderful! Thank you so much! Danke!

By the way: Everybody who went to the MTV-Awards was jealous that he didn`t come to see the U2 show...
I hope the band enjoyed their set as much as I did...
They should have stayed for one more song, STAY (Faraway/So Close) maybe...


buyer71
05 November, 2009
Brandenburg Gate never looked better!
Lights were so beautiful during One! Band was also great. Berlin loves U2. And Willie
Roy McBride
05 November, 2009
Another Irish Traveller...
The gig was amazing...with typical luck of the Irish the rain stopped before the boys hit the stage...the gate looking great with some customized lighting effects. The sound was fantastic, clear as a bell. The boys where well up for it, as good as any normal concert...if you get a chance to watch it, I was particularly taken with Adam, who gave it some gusto to say the least. Regards to all - Roy McBride
sheila491
05 November, 2009
Far Out!
Congratulations on U2 winning Best Live Act On MTV Awards. The song with Jay Z was really cool! Great show!
Yogic
05 November, 2009
CoNtRaStiNg BERLIN
2 beautiful contrasting pics the rest is sooo Surreal : )
Yogic
05 November, 2009
WASN'T There just HERE
I LOVE these updates...very vivid view from here...Thanks U2 for sharing : )
CEVSS
05 November, 2009
Good 4 U2
Thank you for being so available and willing to put yourselves out there. I am amazed at how much you give to your fans. Some people are never happy. Be glad they could hear the joyful noise. Can't wait to see the videos-U2 and Jay-Z! What a show.
jp22
05 November, 2009
Best Live Act
Well done U2 you deserve it - awesome and spectacular shows you put on this year.
DaphneJessica
05 November, 2009
Coming Full Circle
I am a Canadian living in Berlin where part of Achtung Baby was recorded. Achtung Baby is my favourite U2 album. As as young teenager, it was the first CD I ever bought and my life was never the same again after I heard it. Tonight I had the privilege of seeing U2 perform live in front of the historic Brandenburg Gate to commemorate the fall of the Berlin Wall 20 years ago. It was very meaningful, not just to celebrate a milestone in Germany's history, but because it was so personal to ME. Achtung Baby is the very album that made me become a U2 fan in the first place. It started this whole journey... Seeing them here in Berlin tonight was like coming full circle. Love, Daphne
xalira
05 November, 2009
Best performance!
U2 was the first to win an award at this EMAs, and they showed right away why they have been voted for Best live act! Thanks for an amazing year, guys! Now relax to be ready to rock in 2010 just like in 2009, or even better :D We'll be waiting!
05 November, 2009
HIGH LIGHT
A MEMORABLE PLACE - A MEMORABLE CONCERT!THE BRANDENBERG GATE SHINED, THE MUSIC WARMED OUR HEARTS! WE GLOWED! FROM EAST TO WEST! An ancient brand new nation says THANK YOU for these true moments, for these songs of truth, of love, of FREEDOM. I go to sleep with the lullaby in my heart!
Newer comments    1 - 30 of 35    Older comments