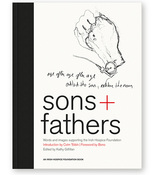 That's the Father's Day present sorted!  Sons and Fathers, a  new collection of essays, features  53 famous sons reflecting on their relationship with their dads. Bono, Larry, Edge and Adam have all contributed, as well as Paul McGuinness, his own son Max, and Gavin Friday - and proceeds from the book's sales will go towards the Irish Hospice Foundation, and Hospice Africa Uganda.

"Bono planted the seed for this book with his gift of the tender drawings he made of his father towards the end of his life, when words had ceased," writes Sharon Foley, the CEO of the Irish Hospice Foundation, in a preface which explains the genesis of the project. Bono's father Bob Hewson had been cared for in a hospice during his final days, and the singer afterwards offered his drawings to help raise money for the foundation.

"I had taken to drawing him as he slept," Bono writes in his own essay, "... to meditate on what a special, talented man I had been given for a father."

The book itself reads like an expanded meditation on that unique and often testing bond between a father and son. Bill Clinton contributes (agonisingly, his own father died three months before the president was born; "I always missed the most important person I never met," he confesses)... along with the likes of Paul McCartney, Julian Lennon and Daniel Day-Lewis.

In a moving reflection, Sting reveals that he'd waited all his life to get a compliment from his father - and finally received one as his dad lay dying. "'We have the same hands, Dad, look.' I am a child again, desperately trying to get his attention. He looks down ... 'Aye, son, but you used yours better than I used mine.'" As Colm Tobin puts it in his introduction, "It is the job of the son to live in the shadow of his father's dreams, sometimes to fulfill them ... or indeed outshine."

Bono describes the father/son relationship as a dance, but it's more akin to boxing than ballet. "We danced until his death, the ancient ritual of son versus father," he says.

And this dance - played out in so many intriguing contexts within the book - seems universal, which is perhaps why the collection feels as powerful as it does. For Paul McGuinness, the context was World War Two; his dad flew missions for the Royal Air Force's Bomber Command.

"What it was like," he asks, "for a kid of twenty-one to fly off in a Lancaster bomber with primitive navigational equipment, responsible for his crew's lives, responsible for finding their destination, being shot at by enemy aircraft, dodging flak, seeing other planes hit and destroyed, is unimaginable. He must have been terrified. I'm sure he was affected by it for the rest of his life," he reflects.

For Edge, the formative moments came in altogether more peaceful surrounds, in the countryside, while... fishing. "It was an important time for my father and me but the connection made between boy and nature has also remained," he recalls. "I still love to go into the wilderness to reconnect with - exactly what I don't know. Maybe the idea of a primal existence and a more natural pace of life... Maybe it's to finally catch the one that got away."

Adam's dad Brian Clayton is "a practical man", in his son's eyes. "He is not naturally affected by music or art and I think," Adam writes, "he believes that getting in touch with his feminine side was listening to my mother."

Nevertheless, when Adam wanted to get his hands on a decent bass (to succeed his first, ineffective guitar), it was Brian who - on one of his regular trips to New York - was commissioned to head into Manny's of 48th Street to track down a Fender Precision. "I often think of what it was like for him to enter that music shop," Adam, says, "and, armed with only a little information, engage with a salesman and hope to be treated fairly and respectfully. I wonder how it was for him to carry it back to Dublin explaining to work colleagues that it was an electric bass for his son Adam, 'who couldn't really play it'."

Larry admits to struggling with his own contribution - which felt too much for him like writing an obituary, while his dad is still "very much alive" (and in his 91st year!). "Anyhow," he says, with characteristic economy of words: "I know he could write a far better piece about himself than I ever could. He still has a way with words. I still play the drums."

The cut-and-thrust between boys and men doesn't seem to diminish as these particular men grow older. (Neither does their fame prevent parental admonishment.) Larry admits that having bought his dad a laptop 10 years ago, he still receives "touching messages that usually include solid advice and the occasional well-intended blow to the solar plexus." You're never too old, it seems.

As Bono reflects in the book's foreword: "It's a mysterious thing, the relationship between fathers and sons ... " We certainly gain some telling glimpses here into the mysteries which have shaped some of these highly influential - and highly influenced - figures. As well as gaining a chance, perhaps, to reflect more upon our own.

Bob Hewson once told his boy: 'Your problem, son, is you're a baritone who thinks he's a tenor.' But Bono's own meditation on Bob yields an ever deepening conclusion:

"I have no scientific evidence to back up the claim that sometimes a close relation, in passing, bequeaths us a gift. Something to get us through. I can't explain this, but I do know that ever since my father died, my voice changed. I can sing those B's and A's with an ease I never had before. I am now a tenor pretending to be a baritone."

'The Child is father of the Man', as Wordsworth once put it. It's a work that's never done.

Sons and Fathers can be pre-ordered here.
Comments
13
You must be a logged-in member to add comments.
SIGN IN / SIGN UP
Alma1
12 July, 2016
Wow
Just wow. Profound stuff. Very touching, and father-son relationships are so important. Great what the proceeds are for, too!
21yrfan
22 May, 2015
Just have to share....
As I mentioned in my previous post, I had been at my mother's side for three weeks while she was in hospice care. She really did not want me to miss out on seeing the show in Vancouver, so I flew home for 5 days and made it to the opening night. For a few hours, my spirit soared and my heart was full. I managed to make it back to her, and literally my mother's last words to me as I held her hand were "how was the concert?" Still thinking of me in her final moments. Tomorrow I am participating in a fundraising hike for hospice. Thanks again for supporting this amazing cause.
Annia
11 May, 2015
Larry
Dear Larry My deepest condolances to you and your family, my thoughts are with you in this sad time.
21yrfan
02 May, 2015
One Step Closer To Knowing
My mother is in hospice care at the moment. The staff and volunteers are so incredibly kind and helpful. Even in her weakened state, my mom is adamant that I take my son to the Vancouver show on May 14. Thank you for supporting the Hospice Foundation.
Golden Eye's Child
23 April, 2015
I wonder
I feel like my father has been the most inspiring force in my life. And while I am a daughter I really like a project that expresses so much kinship in a bond that can be some what tumultuous at times.
AaronWolfson
16 April, 2015
A Real Good Man
My mother passed away way too soon. It was absolutely devastating. She was such wonderful person; who had lost her own mother when she was seven years old. My father did a wonderful job of holding our family together after losing the love of his life, and the mother of his children. He was not just my father, he was my friend. May the Father of life itself, heal and bless us all.
fender35
16 April, 2015
Father&son
Just make me think how close I was till we fell out over my older bruv me& my dad where like brothers went everywhere together booties etc it took 10 year before we started talking but once again we are building that bond AGAIN he's 71 now & you only have one dad me & brother talking bit by bit but getting there.

160X
15 April, 2015
Beautiful reflections
So much of their music has helped me work through some of my relationship with my own father. Their honesty has been an encouragement through the years.
pain_18_
15 April, 2015
GREAT !!!
Love this....Wish I had the financial resources to buy it !!!!
Scott Cleaver
14 April, 2015
New Zeland
So is this going to be available to the rest of the world too? Can someone update me please....much appreciated, as I'd love to get a copy of this book too :) I was never very close to my dad, but would mean the world :) Much love Scott :-) NZ
BONOBOMUSIC
13 April, 2015
Beautiful!
Makes me think of my own father who passed away almost two years ago... Moving.
ReachSoHigh
13 April, 2015
My Father's a Black Belt
My father's also a football coach. Tough all over, but it's often so good. I look forward to this book. My father saw some great musicians of his time. Sometimes we can agree on what's what without taking to another, separate room. 'From father to son / the blood runs thin' There's a lot of truth in that lyric.
u2freak74
13 April, 2015
Touching ...
I have already ordered this book a few months ago. I hardly wait to finally hold it in my hands. It is a very personal and heartbreaking story that B'Man told about his father. and their relationship to each other. Touching ... very touching.
Newer comments    1 - 13 of 13    Older comments