'Putting the gay into Gaelic.'

Second show in Phoenix and a great celebration - not least because of the YES vote for marriage equality in Ireland.

Here's some headlines from the show, you'll have your own if you were there - post them below.

That trilogy of songs from Pride into Beautiful Day and into With Or Without You nearly takes the roof off the arena. Everybody singing every line of every song. Did we mention that the Irish voted for marriage equality? We did, and Bono altered the lyric of 'Pride' to sing 'Free at last, they took your life, they could not take your gay pride...' and then introduced Beautiful Day: 'Putting the gay into Gaelic!'

Iris, remembering Bono's mother, is already proving one of the standout live tracks from Songs of Innocence - with everyone singing the closing refrain. Here's how it arived last night.
'Lately we've been asking ourselves, 'Why are we still a band?
Why did Adam Clayton become a bass player, he's not answering that but it's something we are very very grateful for. What made Larry Mullen a drummer? When I ask him that he says I should keep philosophical questions to myself.
This man gave us our first job and we are still in it.
The Edge is a special case, he fell off himself. He's a Welsh man, comes to Ireland... what are the odds of that?
What are the odds that I would meet these three men?
I met someone the other day and they said 'You know, my mother met your mother and at the time you weren't getting on too well at your school, and it was my mother that told your mother to send you to Mount Temple.
That's where I met these three men.
What a wild ride of a coincidence
So do what your mother tells you.
For me, it was when my mother left me, age 14, that's when I became an artist, and I sing, we sing, this for her.
For Iris... beautiful Iris...'

#U2ie is a story in several chapters, a composition in several movements. Different people see different acts in the show. After Phoenix, Tim Neufeld on Twitter sees four: '1st major theme of concert: parent/child relationship. 2nd: free yourself. 3rd: justice 4 forgotten. 4th: hands, lift em up. #U2ieTour'. What are the acts that you see in the show? Add them here - along with your photos and stories from the show.

Comments
16
You must be a logged-in member to add comments.
SIGN IN / SIGN UP
TexasBrenda
01 June, 2015
Fantastic shows
I had the privilege of coming from Texas to see both shows. I was in GA both nights, in the middle of the runway on night one, and very near the main stage on the second night. Thank you Bono, Edge, Adam & Larry for putting on an amazing show. The new songs are brilliant & I enjoyed every minute of the shows. Also, thanks to Dallas who surprised us in the wristband line Saturday morning.
untgrad92
27 May, 2015
Great NIght!
I traveled from Ft. Worth to see them with my cousin. It was great to have the intimacy back from the stadium tours. Loved every minute of it. My cousin wasn't too sure since he only saw them on Zooropa tour but you changed his mind. Thanks for another glorious night. I've seen you every tour since Joshua Tree.
sodastereomty
26 May, 2015
Bono so close
25 hrs travel from Tepic, México to Phoenix... priceless

lauralj25
26 May, 2015
Phoenix, Night 2
The 7 hour road trip from L.A. to Phoenix was worth it. My friends and I had an incredible time. The boys sounded awesome, the LED screen was an amazing part of the show. Loved every second!

RayJoiner
26 May, 2015
1stU2concertever!
I've been a long-time fan but have never seen them live till this show. It was literally a dream come true for me!!! Incredible night! Bono killed that acoustic version of Every Breaking Wave! It's so fun to sing along with several thousand other fans word for word...like finding your tribe. Someday I hope to hear Crystal Ballroom live. LOVE! that song. I'm hooked...now all I can think is when I can I see them again. Fallon says they play birthday parties. We turn 40 the same day boys...so whaddya say? Haha.
chris&becca
26 May, 2015
Wife and I
My wife and I haven't missed a single tour in Phoenix since 1997 for the popmart tour at Sun Devil Stadium. Thank you for giving so much back to your fans guys! This will continue on as you continue on for decades to come. Yep I have faith that you will never give up the ghost gentlemen.

jmsaenz
25 May, 2015
New love for the newer songs!
I have to say that Cedarwood Road simply looks and sounds incredible. Invisible and the black sound waves in that yellow background is amazing! Thanks for these two wonderful Phoenix shows. I'll see them again in NY.
markg1993
25 May, 2015
Amazing!
Phoenix No. 2 was an incredible show! Brought back great memories of Sun Devil Stadium 1992, but this topped!

Richmond
25 May, 2015
Traveled from TN to the desert to see th
The Phoenix shows were AMAZING! We were 2nd row on the catwalk rail night 1, enjoying every minute! My favorite moments included "In God's Country", "Bad" and walking Bono sing with such passion about this mom during "Iris". We had awesome seats for night 2 in Phoenix. We literally watched Bono walk on the stage to start the concert. From the first note he sang, the energy was incredible between the band and the fans! Everyone in the place stood the whole time! I'll never forget Streets from that night.....it transcended us all to a higher place. We're still on a high from our desert experience!

travelergirl30
25 May, 2015
Fantastic nights
Both nights were magical in their own ways. Yep, still on a high and looking forward to Chicago and New York! Thanks, boys! 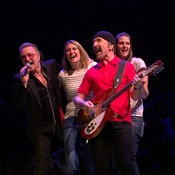 howl
25 May, 2015
Yes! To the future
Some has said Saturday in Ireland was like living in the pages of a Leaving Cert History book from 2115. Hopefully we've left a lot if dark days behind us. (Sniff)
BONOBOMUSIC
25 May, 2015
Beautiful day
From The Netherlands: CONGRATULATIONS IRELAND!

jamielee1975
24 May, 2015
Love and light.
Both Phoenix shows were amazing. I am Still on thr high that U2 always gives from their live shows. If all of the word could get a taste of what they give, it would be a better place.
DeaBeltrao
24 May, 2015
My heart for U2
It was something I will never forget! I love U2 from the bottom of my heart and I'll always do! Thank U2!

lendublin
24 May, 2015
Bigotry is now the Minority..
Such an amazing weekend in Ireland. Love the tributes to the Marriage referendum result U2. It truly was a Beautiful Day on Saturday. it's great that Irish people finally got an opportunity to show that we are, and always have been, a Beacon for Human Rights and Equality, whether it is Peace Keeping Missions abroad, Live Aid/8, Africa, Concern, Trocaire, being huge participants in Greenpeace missions and Amnesty Ireland/International. Bono too, putting his neck on the line to help alleviate 3rd world debt. The list is endless really. This weekend just gone we all got together and rubber stamped full Marriage Equality for all of our Citizens, because we are all Family, Friends, Neighbours, and Colleagues to all Citizens. We do not like to see Injustice, and Inclusion and Respect are Paramount to the Irish way of life. We always support the under-dog, and it ain't cool if you don't in this land. It wasn't a Referendum, it was a Social Revolution, and the next generation Irish will be a Force to be reckoned with, no doubts! U2's Beautiful Day and Pride were heard blasting out from Bars and shops all weekend. The show looks amazing guys, getting great reviews on this side, and cannot wait for it to arrive in Dublin.
bduling2
24 May, 2015
Was at both Phoenix shows
I had the great pleasure to be at both Phoenix shows. Both were great, I liked the setlist on night one perhaps better than night two, but - night two the band was even tighter than night one. Bono's voice on this tour is stronger/better than I have ever heard him - including the full range and all octaves. Literally the best I have ever heard him sing, and I have been to every tour going back to Joshua Tree.
Newer comments    1 - 16 of 16    Older comments