Ordinary Love, written for the new movie Mandela: Long Walk To Freedom, is today released in a 10-inch vinyl pressing to mark Record Store Day. The single is also released in Ireland today, in several other countries across Europe - Belgium, Denmark, Holland, France, Germany, Italy, Spain, Sweden - and in New Zealand. It's out in the UK on Monday. (Participating stores in different countries here.)

The song  features on the movie soundtrack, released next week and the sleeve artwork for the single features a striking painting of Nelson Mandela by Irish artist and illustrator Oliver Jeffers. Oliver, along with Mac Premo, directed this lyric video for Ordinary Love.

The band wrote the new song at the invitation of movie producer Harvey Weinstein and the b-side of the 10" features a second track, Breathe (Mandela Version). Check out our new competition in Zootopia.
Comments
20
You must be a logged-in member to add comments.
SIGN IN / SIGN UP
kjdskgjdlksg
04 June, 2018
Song That Tell a Story
Not All Stories Are in Books : this song can do, Too #U2ComeToThailand 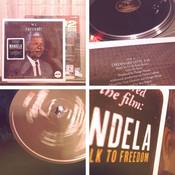 geyce76
12 December, 2013
Just arrived
Just get my copy, this a great item ! Even more now Madiba leave us alone ... Peace to all !
gonzo1974
05 December, 2013
Gran Canción para despedir a Madiba
Gran Canción para despedir a Madiba, GRACIAS U2.
Todd333
01 December, 2013
Got my copy at Euclid Records
Lined up an hour before store opened in St Louis and got my copy, they were sold out quickly. Enjoying the new song, great lyrics, and effort!
deadhead1971
01 December, 2013
For Pete's sake
Put it on itunes! Vinyl? Wtf
nielstenhave
01 December, 2013
Let's see where they end up
A similar website as with Wide Awake's release has been put up where folks can register their copy, at ordinary.lv. Curious to see how many were made, and where they will end up.
Claudiafromargentina
30 November, 2013
Amo esta canción!! I love this song!!!!!
Beautiful Song, the liryc touch my soul!!!
luiscraik
30 November, 2013
MP3
Looking forward for a mp3 version :)
skyppendahl
29 November, 2013
iTunes?
Great great song. Any change to get it from iTunes? I got rid of my old vinyl player 10 years ago...
Jdubdub
29 November, 2013
Love the new stuff!!
I was blessed to get my hands on a copy. Love the new songs. The version of Breathe is Amazing!! Love it guys. Your music brings me so much joy. Thanks for sharing your musical talents with the world. Keep up the great work.
Michael_Forester
29 November, 2013
Make it available for U2.com subscribers
Sold out when I arrived at Amoeba in Hollywood before the store opened. :-(
Grace19
29 November, 2013
Grace (from Canada)
I just purchased two copies of the record and of course, I'm listening to it now! Oh, how I missed my Irish boys!
Dan
29 November, 2013
Got it!!
Picked up my copy in Maine. Limited to one copy per person. Go get one and don't pay stupid eBay prices!
NanyandGonzo
29 November, 2013
Excellent news!
Love every time you guys release a new song. Love the lyrics and the music. Competition or not, I happily wait to get hold of it. In my case, I'm more humble and if there were a special download for us subscribers, it would be awesome! Thanks U2!
katiacampos
29 November, 2013
Amazing!!!
As usual, beautiful y powerful lyrics, a true homage for Madiba from a true amazing, great, talented, one in a billion band. Congratulations!!! Absolutely L O V E I T!!!
pain_18_
29 November, 2013
Waiting
Waiting for the U2.com competition !
khoobo
29 November, 2013
Another masterpiece into my U2 vinyl col
Anxiously waiting for promised copies that should be up for a grab in a promised competition. Definitely need to have a copy in my U2 vinyl collection...
U2Gal
29 November, 2013
Finally!
I'm sure that many U2 fans have been waiting for a while to get a new song from U2, just like I have! This song is amazing and I don't get why some people-even U2 fans- don't like it as much as normal U2 songs! I think that this song will be on the new album to be released in April…..hopefully
TorreyV
29 November, 2013
Getting My Copy in NH
Just picked up my copy. Awesome song for a larger than life man. Thanks U2!
electricco
29 November, 2013
Love the song can't wait for the new U2a
I'd Like to put it on my U2Vinyl collection indeed ; )))
Newer comments    1 - 20 of 20    Older comments