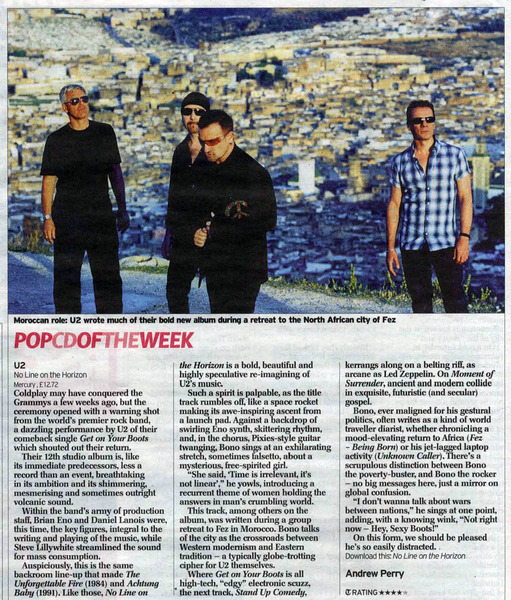 'Salvation in Adam's bass...'
The reviews of the new album are coming thick and fast, here's some of the latest.

Blender - 'Great, alienated album from the universe's biggest rock band'
'Moment of Surrender' is the high point - seven minutes of Bono in gospel mode, lost in the late-night city, questing for salvation and finding it in Adam Clayton's bass.'
More here

NME - 'some new tricks, some old tricks'
'the pomp and arrogance of their best work, enough new sounds and interesting new avenues to satisfy the musos and, at its core, is a very good collection of very good songs played very well. A little more silliness would go a long way, though.'

The Times - 'not the best after all, but don't write off U2'
'Cedars of Lebanon takes shape amid a sonic fug that mirrors the exhaustion of its war reporter narrator:'Child drinking dirty water from the riverbank/Soldier brings oranges he got out from a tank.'

Daily Telegraph - 'less a record than an event'
'No Line On The Horizon' is a bold, beautiful and highly speculative re-imagining of U2's music.'
More here

Los Angeles Times - 'down the river toward something different'
'U2's celebration of life has always also been a celebration of itself, and Bono still has a gift for radiating joy in a way that feels inclusive, not egotistical. At the same time, "No Line on the Horizon" is most interesting when the band and its producers let their well-deserved wallowing become a drift down the river toward something different.

"Fez -- Being Born" will only sound experimental to those who haven't heard Eno's other collaborations (he pulls a sample from one, his exquisite 1984 collaboration with Lanois and pianist Harold Budd, "The Pearl," on "Cedars of Lebanon"), but the song's Radiohead-style cutting beats and dusty undertones work productively against the band's instinctive upward thrust.'

Chicago Tribune - 'Once again in transition..'
'The Irish quartet is once again in transition, uncertain of its destination, and producing some fascinating music along the way. Five of the 11 tracks sound as fresh as anything U2 has done in a decade. The rest isn't nearly that good, putting this in the middle tier of the band's dozen studio releases. But at least the band is trying to reconnect with the sense of yearning and mystery that once made it special...
... "Magnificent" lurks in the shadows for a minute, then breaks into a gallop over the Edge's ringing guitar and Clayton's bounding bass. It's a quintessential U2 moment: Big and yet somehow vulnerable. "Moment of Surrender" completes the journey, and lays out one of the album's key themes: "Two souls too smart to be in the realm of certainty." Nothing can be taken for granted. Anxiety hovers like the organ chords draped over Bono's patient vocal melody. Once again Clayton's bass serves as an empathetic foil, standing just off the vocalist's shoulder, answering his every line.'

Highlights, No Line On The Horizon
U2
©2020 U2.  Powered by Live Nation Entertainment.