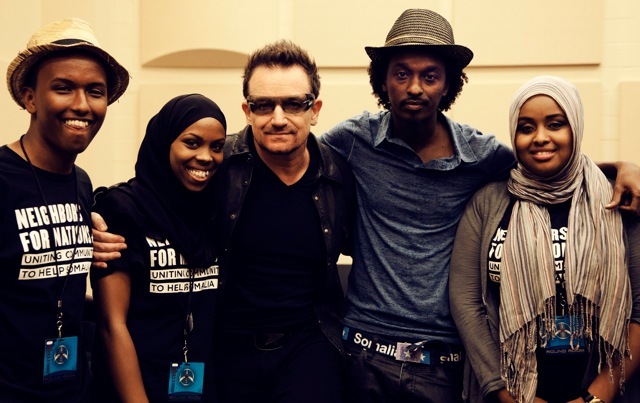 share
Ahead of Saturday night's show in Minneapolis, Bono met with representatives of the local Somali community to talk about efforts to combat famine in East Africa.

The Twin Cities hosts the biggest Somali population outside Somalia and those at the meeting included  leaders of the American Refugees Committee and Neighbors for Nations as well as Somali rapper K'naan.

They discussed the famine emergency across East Africa  - where the UN estimate up to 12million people need aid - and how to get that aid to the right places.

At the end of the meeting Bono said, 'This is the beginning of a conversation that is going to go on.'

Read more about the meeting here.

At the concert later that night, U2 welcomed  K'naan on stage to perform a version of 'Stand By Me'. Bono went on to thank K'Naan and the Neighbours for Nations before dedicating Moment of Surrender to the '12 million souls in jeopardy tonight...'

To find out more about the situation in the Horn of Africa, go to one.org and to support the emergency appeals visit Oxfam, Concern, Save The Children or other agencies working in the region.