Stronger Than Fear in Belfast 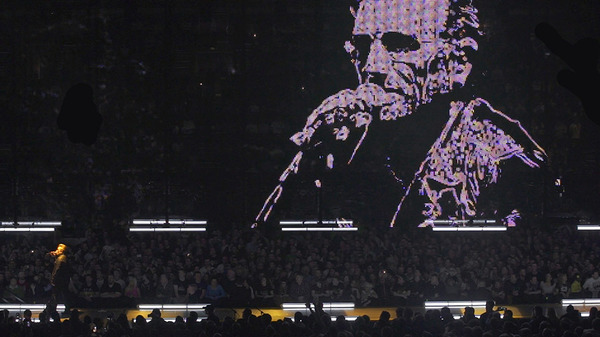 Powerful new visuals for Sunday Bloody Sunday and Raised by Wolves among the highlights on the second night in Belfast.
'This song has been one of the tour highlights for me.' tweeted @AndrewDowlking84  'Really understand the raw element of the album when hearing this song live.'

Out of Control was back in the set tonight, after missing six shows, according to @U2gigs, who also noted that the last time time the band played more than one show in Belfast was back on the War Tour. In fact it was 36 years and four days ago that the band first played this city, at Queens University, their first show outside of the Republic of Ireland, when they were on the bill with  poet Patrick Fitzgerald and, headline act, Squeeze, featuring Jools Holland.

That was even before October, which, tonight, became the most performed track from October (@U2gigs again). But we're jumping ahead of ourselves, can't fail to mention the wonderful Veronica, from U2Chile, who was up on stage to dance through Mysterious Ways and followed by Paco and Alex, two guitar playing brothers from Mexico who led the band through Angel of Harlem.

'Streets' really took off tonight, from the moment Bono introduced it as a prayer, 'that we don't turn into a monster to defeat a monster.'

'I will never listen to where the streets have no name in the same way again after last night, said @Sarah_Mawhinnery. 'UNBELIEVABLE'

For some this was a night to top every night.

'@U2 #U2ieTour @SSEBelfastArena. The single best gig that I have ever been to. Thank you for tonight @U2' (@wstrain85)

The press seem to agree, as the Irish Daily Mail put it, 'There was simply nothing old or hackneyed about this show and new bands could learn a trick or two from the sensational production values. And thanks to a giant  mobile screen, the band once again brought a live concert experience to a new level.'

Or The Irish Daily Mirror:  'From the time the first chord is struck until the last note is played, fans will be captivated by a mesmerising performance that's a lot of fun. While the visuals and lighting effects are spectacular, most of the messages are in the music, the songs from the 80s right up until the present day which still speak to fans old and new. This is a perfect performance from band on form at the top of their game.'

If you were there tonight post your own thoughts and add your photos here.