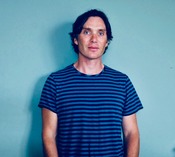 Cillian Murphy is one of Ireland's best loved actors. But the star of Peaky Blinders also plays a leading 'real life' role as patron of the UNESCO Child and Family Research Centre at the University of Galway - whose 'Activating Social Empathy' programme is now delivered to children in many schools across the country.

Cillian's new book Ionbha: The Empathy Book for Ireland - contains over 80 essays and poems on empathy from a range of Irish contributors including what he calls a 'brilliant, brilliant piece' from the Edge.

Brian Draper spoke to him this week for U2.com.

Congratulations on a profound and inspiring book. You've gathered such a rich variety of contributors - from musicians such as the Edge to sports stars, poet-presidents, priests and photographers … Where did you find so many empathetic people?!

Well, there is a lot of empathy out there, which is a positive thing to realise!

We were keen to involve well-known people, but also citizens of Ireland, so it's a broad spectrum. We didn't give them any steer apart from, "Write what you like - and what empathy means to you!" And what we got back was something very pure, and authentic to each of them.

We'll come on to Edge's essay - but what else especially caught your own eye?

Well, there's a lovely piece called 'Empathy Checkpoint' which is written by a Garda called Martina Venneman. It really struck me as very honest and gives you an insight into her working life, which I found very moving. There's an essay by Michelle Darmody about empathy through food, which is not something that would spring to mind immediately.

Paul McGrath's piece, if you're into football, is gorgeous. John Kelly wrote a beautiful poem for us … There are so many different things!

The photographer Ailbhe Greaney's wrote about 'seeing with conscious attention'. It helped me to think about empathy from an artistic point of view.

Do you have your own definition?

Well, the etymology of 'empathy' is interesting - it comes from a German word which means 'feeling into', and that was revealing to me.

It's not about sympathy. Sympathy is the enemy of empathy, because you just add your own sorrow or fear or pity onto what that other person is going through.

Empathy is always about 'the other'. Now, you can refer to 'the other' in a dangerous way - there's an awful lot of 'othering' going on in society at the moment - but another rudimentary definition is 'walking in the shoes of another'.

I like best the term 'active' or 'activating empathy'. You sit and listen with someone, or sit and absorb something that is affecting your community or your family or your school or your county or your country, and you are then compelled to take an empathetic action.

That to me is when it's at its most powerful.

Well, that is our real goal with what I'm calling this whole 'empathy revolution'. Over 150 schools are actively engaged in teaching empathy here in Ireland, and we expect to see this increase dramatically next term. The book and the programme has gone out to every single secondary school.

We did a randomised control test on kids who have already gone through the programme, and one of the results is that their own academic results improved, too. So it's a win-win.

The Child and Family Research Centre gets young people themselves to research the issues affecting them. It's very rigorous. And then they collate these results and send them to the government with a view to affecting policy.

So all of it has a real-life goal. And this isn't a self-help book, by the way. It's not hocus-pocus - there is data here, and that to me is key. I'm results based.

In your own essay, you mention how important empathy is to you as an actor. Listening, in particular. Could you say more?

Listening was probably the eureka moment for me as a young actor.

You spend a lot of time on your own, learning your lines. And you can be so obsessed with your own performance that it becomes all about yourself - whereas great acting is when two actors are in a scene together, completely present and completely listening to each other. I think the audience feels that.

When that clicked for me, it released something. It's about trying to be present, listening to what the other person's actually trying to communicate.

So you notice that skill playing a part in your 'real' life?

Look, as an editor of a book about empathy, of course you're going to be the first person to get slammed when you're seen to be not listening, or just thinking about yourself! We're all self-obsessed creatures. But - if there is an effort made every day just to be a bit more present with other people and to listen, that is indeed an act of empathy, yes.

You've played some complex, troubled characters. As an actor, do you seek to empathise with them, too - with Tommy Shelby, for instance, who you played in Peaky Blinders?

If you look at why a character is in the place they are, you'll generally find that it's because of circumstances. Tommy Shelby is suffering from the trauma of World War One. That formed him and his character. Nobody can justify his behaviour, but - there's a reason why the character got to that point.

I'm talking here about complex, complicated, contradictory characters, not 'hero' or 'villain' tropes. If you impose your own moral compass on those characters, you're screwed. You're never going to give a detailed, interesting performance.

Again, there's a corollary with real life: you see the person who is sleeping homeless on the street or the person who's a drug addict or has lost their job and there's generally a reason why that person got into that place, and to judge them on the basis of the person you see in front of you right now is not just.

As Edge wrote in his essay, 'There are endless ways and justifications that we use to "other" people.'

You go back quite a way with U2, don't you? First as a fan - you've spoken before about obsessing over 'She's A Mystery To Me' at the age of 11.

I still think that's one of the greatest songs ever to be written!

Did you have a sense when you were growing up in Ireland that U2 were contributing to your own formation as a person or an artist?

U2 were never afraid of emotion, in fact they thrived on it, and that was very instructive to me as a youngster - to see how emotion, correctly harnessed, can be a powerful force, and not something to be afraid of. In the Ireland of the 1980s and 90s that was radical. I've always looked for that in art of all forms, and in the work I try to make myself.

So I think for anyone like me in Ireland who had artistic leanings, U2 were huge. They set off on the road that we all tried to follow on.

It's hard to quantify how important they are; it's hard to think of Ireland without U2, you know - certainly modern Ireland. It was a crazy time of accelerated change here in the 80s and 90s, and U2 have always been a constant, certainly in my own adult life.

I feel so lucky that we have all that music.

And you've come to know them personally.

Well, I'm still just a fan, you know? I get incredibly nervous around them, because I'm still that 12-year-old boy who's listening to Joshua Tree and I still can't believe I'm standing next to Edge or Bono, Larry or Adam … But they're always so gracious. They've been very supportive of me as a young actor, and very kind. Those guys have big, big hearts.

How did Edge get involved with the book? Did you have to twist his arm?

Well I had a notion that this might be something that would interest him, so I reached out and he came back straight away with this brilliant, brilliant piece. He was one of the first people to say yes - and when you're able to say that you have the Edge contributing, other people get excited too and want to help. So that was very kind of him.

I think he very brilliantly describes what is happening right now in places like Italy, Sweden, and Hungary, where 'fear has been weaponised by deeply cynical politicians who play our fear like violins … turning our society into an array of ideological ghettos'.

His definition is both beautiful and powerful.

Do you feel there's hope for the next generation, to become that act of defiance?

It's like a muscle that needs to be exercised. Kids have it when they're very young, every parent knows that. But it gets harder to access through adolescence, and it needs to be exercised. Again, there's data on this. And if an adolescent experiences an act of empathy toward them, particularly from an adult, it gives them the permission to be empathetic.

In 10 or 15 years time these kids are going to be writing the articles, making the films, running the banks, making the legislation … so this is the generation we should be focusing on. It's an emotionally draining time to be a teenager, especially with social media. But I have real faith in young people. I see it with my own boys. They surprise you every day.

Ionbha: The Empathy Book for Ireland is edited by Cillian Murphy, Pat Dolan, Gillian Brownee and Mark Brennan. It was published in October 2022 by Mercier Press.

All proceeds from the book go directly to delivering the 'Activating Social Empathy' education programme in Irish schools and youth-work organisations.