'This is not a charity concert...' 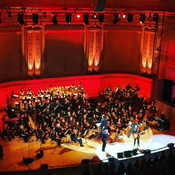 Cathleen Falsani, longtime fan of the band and ONE Campaign activist, reports on Tuesday night's Carnegie Hall celebration of ONE and (RED) to mark World AIDS Day.

'The old joke goes something like this:  A musician walking down Manhattan's 7th Avenue stopped a passerby and asked, "How do you get to Carnegie Hall?"
The cheeky New Yorker answered, "Practice, practice, practice."
For Bono and the organizations he co-founded—ONE and (RED)—the answer Tuesday night in New York City's historic music venue was, "Progress, progress, progress!"
Joined by the Edge, Hozier, Jesse J, Miley Cyrus, Stephen Colbert, Sting, Trevor Noah, and a host of other artists and dignitaries—including U.S. Vice President Joe Biden, former President Bill Clinton, and Bill and Melinda Gates—for an evening celebrating "the possible," Bono lauded the decade of astounding progress made by the organizations and their supporters toward eradicating HIV/AIDS and ending extreme poverty.
"This is not a charity concert. Justice takes centre stage tonight," he told the Carnegie Hall audience. "Justice calls us to a higher standard...This is an instigation. This is a provocation."
"It always seems impossible until it's done," he added, quoting the late Nelson Mandela. "That is the theme tonight... There is no first world. There is no third world. There is only one world."

Since the inception of ONE and its predecessor DATA (Debt, AIDS, Trade, Africa) in 2002, more than 15 million people around the world are now on life-saving antiretroviral drugs—up from 700,000 in 2000.

Other signs of progress in the battle against AIDS and extreme poverty include:

But the night wasn't all speeches and data. It was a celebration filled with music that elevated the mind and the spirit. Jesse J brought the house down with her song "Who You Are," and a spectacular rendition of Prince's "Purple Rain." Miley Cyrus performed several songs, including a new tune she'd just written (the lyrics were still on her cell phone) titled, "Pablo the Blow Fish" (Yes, really).

On a serious note, Cyrus, who recently turned 23, said: "I know I will live in an AIDS-free world one day, and I look forward to that."

Colbert, who introduced the work of the Gateses who, along with former NYC Mayor Michael Bloomberg, Dr. Mo Ibrahim, and Dr. Ngozi Okonjo-Iweala—were the official honorees at the Carnegie event - put it best when he said: "Poverty is a jerk."

Backed by the Orchestra of St. Luke's, the house band for the evening, Hozier performed his hit "Take Me To Church," and later joined Bono and Edge in another show stopper, "When Love Comes To Town."

The pair also performed an intimate, stripped-down version of "Every Breaking Wave," "Stuck in a Moment," and perhaps the musical highlight of the night, a smashing rendition of "Angel of Harlem," backed by a choir from the Democratic Republic of Congo, the Orchestra Symphonique Kimbanguiste.

“I Still Haven’t Found What I’m Looking For” had everyone in the grand venue on their feet, as Bono reminded us that even though much has been accomplished in the fight against AIDS and extreme poverty, there’s still much to be done.

The evening ended as it began, with "One," and the reminder that "there is no them, only us."

As ONE and (RED) have proven, together, anything is possible.'

Cathleen Falsani is an American journalist, author, and longtime ally of the ONE Campaign, where she serves on the organization's advisory board for girls and women. She saw her first U2 show in Chicago about 15 years ago and has seen several dozen since then.

Comments
7
You must be a logged-in member to add comments.
SIGN IN / SIGN UP
snodrog
09 February, 2016
Looks Impressive-Inspiring- Was this eve
Though I would prefer to have attended live (:-D) I would love to watch the vid if possible...yes? Gordon Holland
pedrovilhena
13 December, 2015
Bono Edge
Love you!
maryamd
08 December, 2015
One more photo
Thanks for an incredible night! Maryam and Lexi.

maryamd
08 December, 2015
ONE incredible night
I attended this wonderful evening with my 9 year old daughter who is a young activist. Simply an incredible night filled with wonderful music and inspiration. Thank you to everyone from ONE and (RED) for making this evening so special, I know that with the commitment and enthusiasm from the all the people I met that evening that we can achieve a world free from extreme poverty and HIV. I will never forget this evening, I have seen U2 in concert for 30 years but have never been in such an intimate setting. Truly a once in a lifetime experience. Thank you and God Bless.

nitz1
04 December, 2015
Spectacular!
So thankful to have been able to attend this event with my family on my daughters 17th Birthday- Carnegie Hall has a special place in my heart as I sat in that Hall many times in the late 1980's for my job at a classical artist management firm. It was a tough time back then in the artist community and have lost friends and co workers to AIDS. Thank you RED and ONE for a amazing nite!
cathleenmary
04 December, 2015
Thank you, Adam Phillips
for the photo used above. You rock, pastor. @phillipsan
Phil710
04 December, 2015
Thank You For An Amazing Night
It was a privilege to be part of such an amazing and once in a lifetime night.